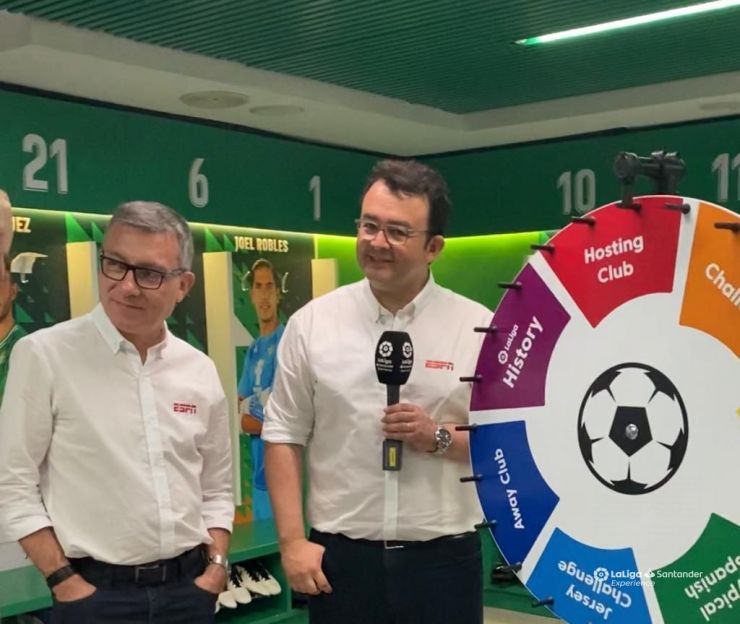 The LaLiga Experience puts its guests to the test in Seville

It was a week packed with football for our guests from ESPN Brazil and VIACOM18 India. Not only did they get to meet their idols from the Sevillian club on a very special morning at the Luis del Sol training ground, they were also put to the test as soon as they arrived at the facilities. For the first challenge, they had two special assistants: the Real Betis Women players Matilde Fidalgo and Stefanie da Eira, who were on the Indian and Brazilian sides respectively.

In the 'Receba Challenge', the two teams had one mission: to hone their striking skills, score a goal and celebrate like 'Luva de Pedreiro', the Brazilian who has become a global phenomenon in recent months thanks to his goals and the enthusiastic way he celebrates them on social media.

In this challenge, ironically, it turned out that Luva de Pedreiro's fellow countrymen were not at the top of their game. The most animated 'Receba' came from the Indian side, supported by Stefanie, putting VIACOM18 ahead on the score board.

The second challenge, the 'Roulette Challenge' was held in a very special setting: the Verdiblanco dressing room. With both sides demonstrating a wealth of knowledge about LaLiga and Spanish culture, the contest ended in a well-disputed draw.

To round off the competition, Dhenuka and Alaukik, the representatives from India, went head to head on the Guadalquivir River to decide on the victor with questions about the city of Seville. Always attentive to the explanations of the city tour prepared especially for our guests, it was Dhenuka who demonstrated the most knowledge about the Andalusian capital and proclaimed herself champion of this LaLiga Experience. Minutes before the match, she was presented the trophy by Rafael Gordillo, the Real Betis legend.