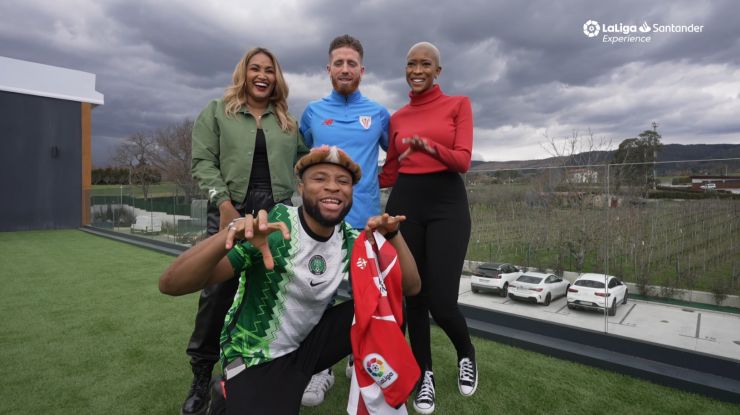 Bilbao welcomed C-More's and SuperSport's guests for a fun-packed week of activities in conjunction with Athletic Club, giving them the behind-the-scenes scoop on Los Leones

Our guests headed off to northern Spain with a packed schedule of activities to look forward to: four days steeped in the Rojiblanco atmosphere which saw them zipping from one activity to the next, interspersed with the traditional sampling of 'pintxos' (the local version of tapas) in a city that lives and breathes football.

After arriving in Bilbao, the winner of LaLiga’s Ultimate Challenge contest organised by C-More in Sweden, Mikael Karlsson, along with the influencer Chuey Chu (SuperSport Nigeria) were unveiled as the 'managers' of Athletic Club. Meanwhile, the TV presenters Julia Stuart and Twiggy (SuperSport South Africa) joined the club's coaching staff, in a press conference that culminated with them being presented personalised shirts signed by the first-team squad.

This was just the opening act, however, as the show continued the next day with the guests visiting Athletic Club's training ground in Lezama, where they took part in the first team's training session. They were welcomed there by two very special hosts: Unai Simon, the team captain, and Iker Muniain, who fielded questions from them in an experience that they will never forget.

The ball carried on rolling in the direction of San Mames, where the LaLiga Experience explored its recesses with an exclusive private stadium tour, allowing the guests to delve into the history of the age-old club. The unmissable finale was the magical match between Marcelino Garcia Toral's team and Real Sociedad.