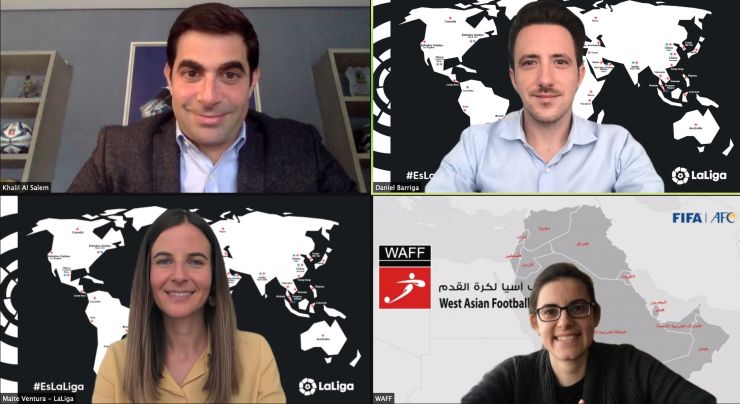 Both organizations have renewed the MOU signed in 2017 for a period of three years with the aim of deepening their collaboration in different areas.

As part of its drive for excellence and international expansion, LaLiga has renewed its collaboration agreement with the West Asian Football Federation (WAFF) with the aim of fostering the sustainable growth of football in Spain and West Asia. This partnership will see the two institutions share information and collaborate in a range of areas to further their development.

LaLiga and WAFF will work together to improve women’s football in the region, to organize youth development programs and seminars, and fight against piracy, among others, in an agreement signed until 2023.

The renewed MOU focuses on developing the women's game with both entities already working on several projects promoting diversity from grassroots level through the values ​​of sport. These projects will help to develop women's football together with the federations that are part of WAFF (Bahrain, Iraq, Jordan, Kuwait, Lebanon, Oman, Palestine, Qatar, Saudi Arabia, Syria, United Arab Emirates and Yemen).

The document also covers other areas of collaboration, from organizing seminars in the West Asian region and organizing young development programs to combating racism, discrimination, and exclusion in the world of sports.

Maite Ventura, LaLiga Managing Director MENA added: "In LaLiga, we have a firm commitment to supporting the development of women's football not only in Spain, but also internationally, as evidenced by agreements just like this one. We understand the growing strength of women’s football globally and we believe that this partnership will bring great benefits to both parties".

From his turn, Khalil Al Salem, General Secretary of WAFF added: "Our mission is to develop the game in the region, and women's football is on the top of our priorities. A partnership with LaLiga, as a pioneering organization in the areas of development, is a great contribution towards that".