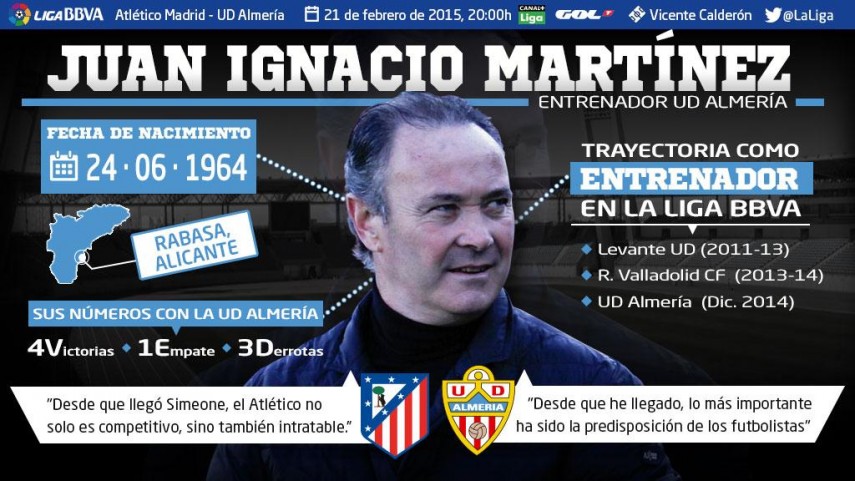 Juan Ignacio Martínez: "Football is my passion, I enjoy each day"

The Almería manager speaks with LFP.es about the Andalusian side's good run of form since his arrival at the dugout.

Juan Ignacio Martínez (Alicante, 1964) took charge of UD Almería on matchday 16, and since then the team have picked up 13 of their 23 points to date in the competition. With oodles of managing experience under his belt, JIM sat down with LFP.es to assess his side's good form and also spoke about their upcoming rivals, Atlético Madrid.

LFP.es: What has Juan Ignacio Martínez done at Almería for the team to have more than doubled their points tally during the two months he has been in charge?
Juan Ignacio Martínez: The most important thing since my arrival here has been the willingness of the players to work. Football cannot work without the commitment of the players. They are the ones who compete and it is their performances that determine whether the team plays better or worse.

LFP.es: What were things like in the dressing room when you arrived?
Juan Ignacio Martínez: Francisco's departure took its toll. He was an Almería player, some of the members of the squad were his team-mates at one time, and he managed to keep the club in the division last year, with all the difficulty that that entailed. However, this year there was a lack of consistency, and without that, we coaches can be let go very quickly.

LFP.es: You have a lot of managerial experience. After so many years is your passion for coaching the same as ever?
Juan Ignacio Martínez: I'm even more passionate about it now. The R. Valladolid CF relegation really affected me and it took me a while to get back to feeling like myself again. I'm a man of convictions who does things passionately. Between the end of last season and joining Almería I recharged my batteries and I have tried to avoid committing any of the same mistakes again. Football is my passion, it always has been, and that acts as an extra motivating factor. I have had the good fortune of making it to the topflight and I enjoy each day of it. Matchdays are the highpoint for me.

"Atlético are without equal, they are a fearsome side"

LFP.es: For a manager who enjoys football so much, what was it like playing in the UEFA Europa League with Levante UD?
Juan Ignacio Martínez: You don't realise what it means while it is happening, it is often said that things become more significant with the passage of time, and that is definitely the case. Each time I go back to Valencia an indescribable feeling comes over me. We were able to get through the preliminary stage and also beat Olympiacos FC in a knockout tie, all while remaining competitive in the Liga BBVA, where we maintained our high standards of play.

LFP.es: Since your arrival, Tomer Hemed has scored six goals to bring his total tally in the Liga BBVA to seven, and he has also earned eight points for the team. What do you put the Israeli's great streak of form in front of goal down to?
Juan Ignacio Martínez: I told him on the first day that if he was able to understand and buy into my message and training methods, then the goals would come. We have done specific work with him. He is extremely professional and it is a privilege to have him.

LFP.es: Another player who has shone over the last few weeks has been the goalkeeper Julián Cuesta. His upsurge in form also coincided with your arrival.
Juan Ignacio Martínez: Rubén got injured when I arrived. I already knew him from our time together at Cartagena and he is an excellent goalkeeper. Julián had played in the Copa del Rey games and was lacking regularity. He kept a clean sheet and saved a penalty in his first game against RC Celta, a dream for any keeper. He has been growing in stature ever since then and now we are well covered in that position.

"I show my players funny videos to get their attention"

LFP.es: This weekend you travel to the ground of the current Liga BBVA champions, Atlético Madrid.
Juan Ignacio Martínez: Since Diego Simeone's arrival they have not only become a competitive team, but one without equal. They play to win every match. They are the champions of this competition, which is an extremely difficult league to win. They are a fearsome side. Like always we are going to try and catch them off guard with our doggedness. We know how difficult a match this will be. We can't make any mistakes and must be aware that they can cause us problems at any moment.

LFP.es: Are Atlético even more dangerous now following their defeat to Celta last weekend?
Juan Ignacio Martínez: That makes things worse for us because they'll be even more up for this game now. Now they have had that 'stupid' result every team has. We will have to be much more alert, they are a side that put teams to the sword, especially in terms of their competitive edge.

LFP.es: José Bordalás, the AD Alcorcón manager, is your cousin. When you were children did you ever think you would both be part of the professional game?
Juan Ignacio Martínez: Yes, but I thought we’d be footballers. He was a very good player, he was in the ranks of the Hércules academy and I played with Elche. We played together at Torrevieja in the Segunda División B, but he had very bad luck with injuries. We got our coaching badges together and have faced off on numerous occasions as managers. We would love to meet in the Liga BBVA.

LFP.es: What were those games against your cousin's teams like?
Juan Ignacio Martínez: We would send each other funny messages during the week. On the day of the match, after greeting each other… well, we are very competitive people so we would both be looking to win. Then the loser had to buy lunch, the wager was a rice dish. I’ve never beaten him, so I'm still in the red.

LFP.es: You show your players funny videos during your team talks. What is the purpose of that?
Juan Ignacio Martínez: I do it to get their attention, to surprise them with something different. For example, I'll play them a video of a guy making his way onto a paddle court who walks straight into the glass. Stuff like that.

LFP.es: How did that idea come about?
Juan Ignacio Martínez: When I stopped playing football, in order to make a living for myself, I worked as a salesman. The human resources department would put on videos for us during our meetings. They weren't funny but they were enough to grab our attention. I have taken a lot of things from my work experience with me into the dressing room.

LFP.es: How do your players react when you play them videos like that for the first time?
Juan Ignacio Martínez: There is a collective chuckle and, with that alone, you have achieved something. I try to be natural with my players. I'm not looking to be popular because that is not necessary.