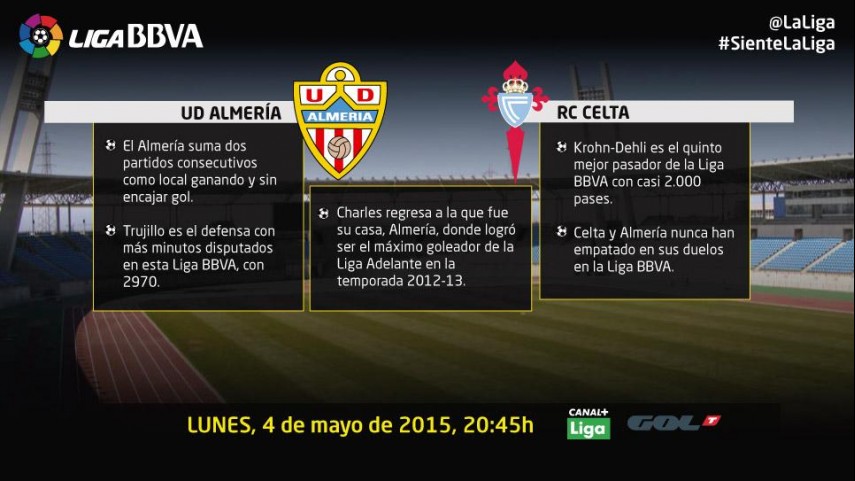 The Andalusians are aiming for their third home Liga BBVA win in a row to move away from the drop zone, while Celta remain in with an outside chance of Europe.

UD Almería and RC Celta close out matchday 35 of the Liga BBVA at the Estadio de los Juegos Mediterráneos, with three hugely important points at stake.

The hosts, who have improved since Sergi Barjuan’s arrival in the dugout five matchdays ago, are after their third straight home victory to put daylight between themselves and the relegation places. To do so, they will have to beat a Celta side who continue to play good football, arrive on a high after beating Málaga CF last time out, and are looking to make the most of an outside possibility of qualifying for Europe.

Although Almería coach Barjuan will not reveal his match squad until the morning of the game, he will be unable to call upon defenders Fran Vélez and Michel Macedo, while he welcomes back forwards Thievy Bifouma and Wellington from one-match suspensions, in addition to midfielder Fernando Soriano, who has recovered from injury. Celta counterpart Eduardo Berizzo has included youth product Borja Fernández, while defender Carles Planas and midfield men Nemanja Radoja and Borja Oubiña remain injured.

Views from the dugout

Speaking ahead of the match, Barjuan discussed the difficulty of the fixture that awaits his charges. "We’re going to face a titanic match-up, and we have to be mentally and physically prepared," said the young coach. "Celta play a very physical game, they have good individuals and they come into the match in good form; we have to play with cool heads." Meanwhile, Berizzo declared that the clash is "very important for us". He added: "We need to impose our style of play against opponents who are dangerous if given space and have recovered their solidity. It’s going to be a tough game against a team in need of points".