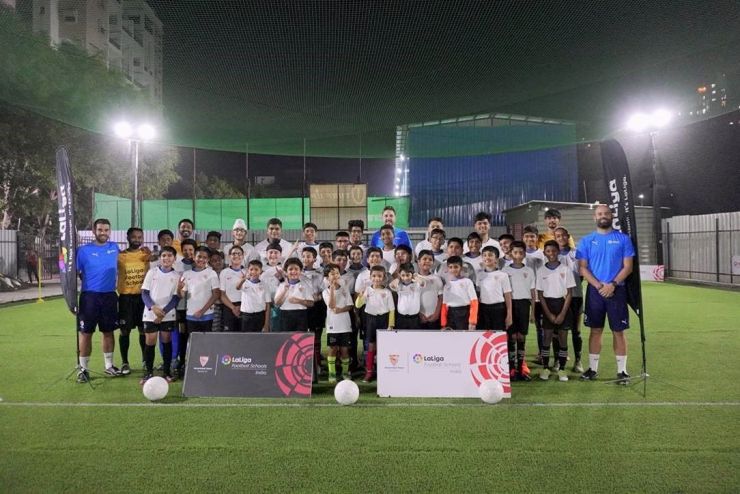 Over 70 kids who are a part of the LaLiga Football Schools programme in Pune participated in the masterclass and football fiesta at Turf Up, Pune.

The masterclass was led and executed by Javier Cabrera, Technical Director and Saul Vazquez Chas, Regional Technical Head (West) from LaLiga Football Schools India and David García Gómez, Senior Specialist, Sports Projects Development, LaLiga for the young footballers from the centre. Apart from the technical training, activities were organized as a part of the Football Fiesta including 3v3 tournament, dribble circuit, juggling contests, cross bar/accuracy challenge, shooting and possession challenges and more to develop the technical and competitive skills in an exciting manner. The students, from age categories 8 to 18, were divided into two groups and played with official Sevilla FC equipment which was provided by the Spanish club.

LaLiga Football Schools is the Spanish football league’s flagship project in India, aimed at grassroots development of the sport. Under this programme, LaLiga has undertaken several impactful projects including an annual Scholarship, ‘Train the Trainer’ to impart technical training to coaches, Training Camps and association with three top LaLiga clubs, Sevilla FC, Celta de Vigo and Real Betis in select centres to name a few. Since its launch in 2018, LaLiga Football Schools has expanded to over 30 centres in 14 cities and has impacted over 10,000 Indian students. Through engagement initiatives such as the Masterclass and Football Fiesta organized with Sevilla FC, technical knowledge is presented and delivered to young Indians.

Jose Antonio Cachaza, Managing Director, LaLiga India said, “The success of LaLiga Football Schools and the response we got from the kids just goes on to show that India is ready to overhaul its football landscape. Like last year, Sevilla FC, has again showed their commitment towards grassroots development in the country and has made sure that it will not only provide an immersive experience for the aspiring footballers but also motivate them to perform their best and become the first Indian global football superstar.”

Sevilla FC’s CEO, José María Cruz,FC said: “Last year when we collaborated with LaLiga Football Schools, we were glad to see the enthusiasm in the young Indian footballers and we decided to continue with this initiative as it gives an opportunity to students to tap their potential and learn the necessary skills to pursue their passion. Our partnership with LaLiga for LaLiga Football Schools in Pune and for initiatives such as this Masterclass and Football Fiesta is a step towards Sevilla FC´s commitment to work with and train the future generations of Indian footballers.”

LaLiga is a global, innovative and socially responsible organization, a leader in the leisure and entertainment sector. It is a private sports association composed of the 20 teams in LaLiga Santander and 22 in LaLiga SmartBank, responsible for the organization of these national professional football competitions. In the 2018/2019 season, LaLiga reached more than 2.7 billion people globally. With headquarters in Madrid (Spain), it is present in 55 countries through 9 offices and 46 delegates. The association carries out its social action through its Foundation and is the world's first professional football league with a league for intellectually challenged footballers: LaLiga Genuine Santander.