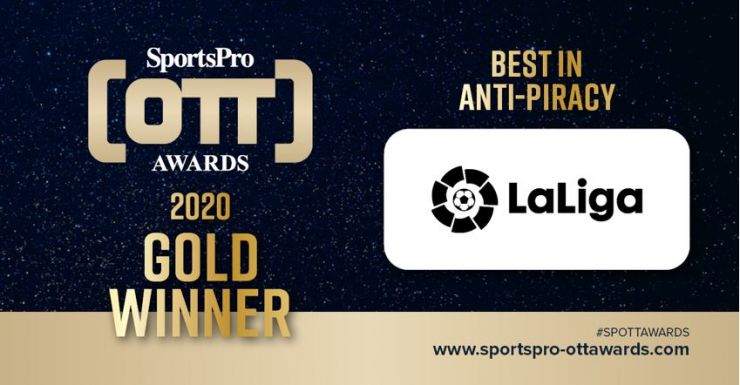 For the second year in a row, LaLiga took the Gold Award for continuing to lead the fight against piracy through new technology and collaborations, protecting intellectual property rights worldwide.

LaLiga has received the Gold Award for ‘best in anti-piracy’ at the SportsPro OTT Awards 2020, acknowledging the league’s continued success with protecting intellectual property rights in the digital world.

The annual awards recognise the leaders in technology innovation, digital production and fan engagement within sports and entertainment, with awards decided by an expert judging panel of senior stakeholders from international rights holders, broadcasters and technology leaders.

It is the second year in a row that LaLiga has been named the winner in the antipiracy category.

Announcing the winners in a virtual ceremony, the judges highlighted the fact that LaLiga has become an example that other competitions are following when it comes to tackling piracy. "The fact that other leagues are looking to them for help says it all," said a statement from the SportsPro OTT Awards.

In the past year, LaLiga has expanded its global collaborations by agreeing to provide anti-piracy services to international competitions such as Dorna Sports, organisers of the MotoGP World Championship and Superbike World Championship (WorldSBK). Organisations such as Belgium’s Pro League also benefit from LaLiga’s expertise in this field.

Among its other achievements, LaLiga helped to secure court orders that blocked access to 18 different web domains, affecting over 5.3 million users around the world. Complaints have also been filed against the operators of 25 IPTV websites

LaLiga assumes direct responsibility for addressing anti-piracy and makes sustained investment in technical and human resources, all of which is targeted at protecting the value of audiovisual rights. It operates a five-star strategy that combines legal expertise, international collaborations, in-house technology development, communications campaigns and collecting evidence to process complaints.

Further evidence that LaLiga’s approach brings success was shown by the GFK 2019 Piracy Observatory and Digital Content Consumption Habits report. The findings show that between 2018 and 2019, access to illegal football content was reduced in Spain by 19%, while the potential losses from piracy were reduced by 11%. In both cases, the Spanish football industry showed the greatest success in tackling piracy, compared to sectors including music, film and video games.

“It is our responsibility as rights holders to protect the audiovisual value of competitions for the sake of broadcast partners and clubs,” said Emilio Fernández, chief operating officer for LaLiga Content Protection. “To receive this recognition from peers in the industry provides us with further motivation to work together and stop the theft of sports rights.”