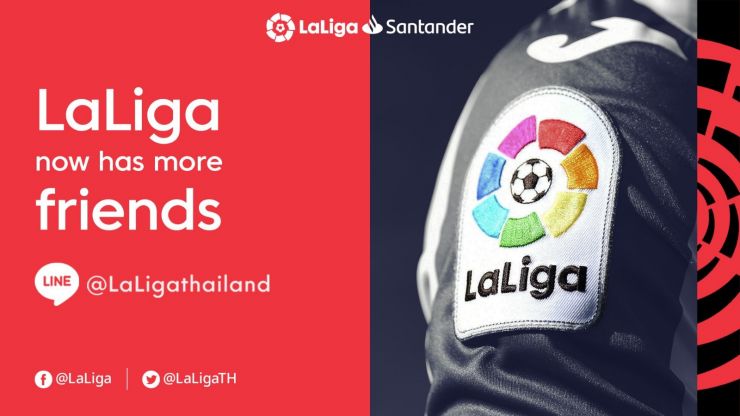 This announcement helps LaLiga get close to almost 90 million fans through multiple social media platforms across the globe.

LaLiga has today added LINE IDOL to its ever-growing list of social media platforms in an announcement in the Thai capital, Bangkok. This news means LaLiga is available in over 15 languages across 12 platforms.

Becoming the first sports league to have LINE IDOL status will mean LaLiga will be able to get closer to its fans than ever before. LaLiga will be featured on LINE TV, the social media company’s embedded video platform, as well as LINE Today – the news platform within the media’s ecosystem. Opening a LINE IDOL account will allow LaLiga to gain greater visibility allowing followers easy access to news and content from the league.

Over the course of the 2018/19 season LaLiga has aimed to service fans across all the leading social media platforms. It saw a rise of almost 48%, from 59.1m to 87.5m users during this time, further showing the appetite for LaLiga content and the desire for fans to stay connected to the best league in the world.

LaLiga’s Director of Digital Strategy Alfredo Bermejo hailed today’s announcement: “The launch of LaLiga´s account on LINE Thailand is another step in the process of our globalization, which seeks to connect with fans around the world and offer the best content adapted to each market. For us it’s a very proud moment to have become the first sports competition with a LINE IDOL account.”

Founded in 1984, LaLiga (Liga de Fútbol Profesional) is a sports association comprising the 42 teams that make up the first and second divisions of professional football in Spain. LaLiga, based in Madrid, is responsible for the LaLiga Santander and LaLiga 123 leagues and the television production, which in the 2017/2018 season reached more than 2.7 billion people globally. The association also has an active foundation and is the world’s first professional football league with a league for intellectually challenged footballers: LaLiga Genuine Santander.