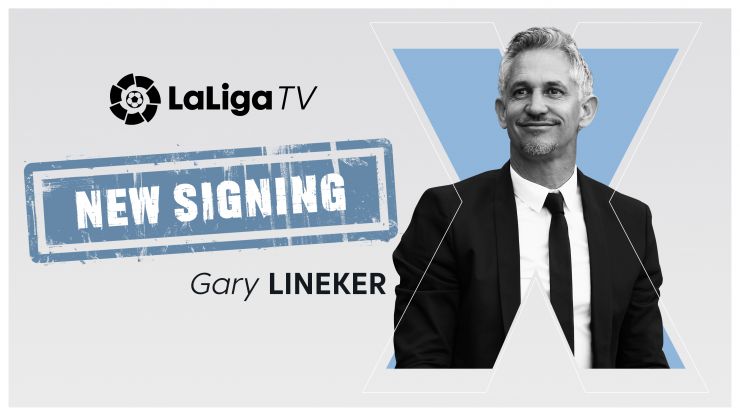 Gary Lineker, the former England captain and FC Barcelona striker, will join the on-air talent line-up of LaLigaTV, the 24/7 channel featuring all live matches from Spain’s top flight LaLiga Santander, from next season.

In a multi-year agreement, Lineker will present key fixtures on LaLigaTV and feature regularly on the channel’s VIVA LaLiga studio programme, broadcast live from Barcelona, amongst other LaLiga-related promotional activities.

“I’m thrilled to become a part of LaLigaTV, a channel I’ve watched every weekend for the last two seasons” said Lineker, who featured for FC Barcelona from 1986 to 1989, scoring 42 goals in 103 league appearances. “I have fond memories of my time playing in Spain and very much look forward to sharing the excitement of LaLiga with viewers in the UK and elsewhere.”

Melcior Soler, Audiovisual Director at LaLiga, said: “Adding Gary Lineker to our talent pool is really exciting for LaLiga fans. He has a vast portfolio of presenting experience and an in-depth knowledge of Spanish football. We look forward to witnessing the expertise, energy and passion he will bring to LaLigaTV.”

Lineker played in LaLiga for three years between 1986-1989 where he had a starring role for FC Barcelona, scoring twice on his debut and registering a hat-trick in ElClásico against rivals Real Madrid. He brings with him a wealth of broadcasting experience, having been the host of BBC’s Match of the Day since 1999, heading up the channel’s coverage of major international tournaments across the same time period and fronting BT Sport’s UEFA Champions League offering for six seasons.

LaLiga’s 2021/22 season kicks off on Friday 13th August with Atlético Madrid looking to defend their league title and LaLigaTV is the best place to catch all the action, including the following Matchday 1 fixtures (KO times UK/BST):

LaLigaTV is the UK’s first dedicated channel showing all live content from an overseas football league. The channel is available on Sky (Ch. 435) and Virgin TV (Ch. 554) via Premier Sports, as well as Amazon Prime Video Channels and the Premier Player streaming services.