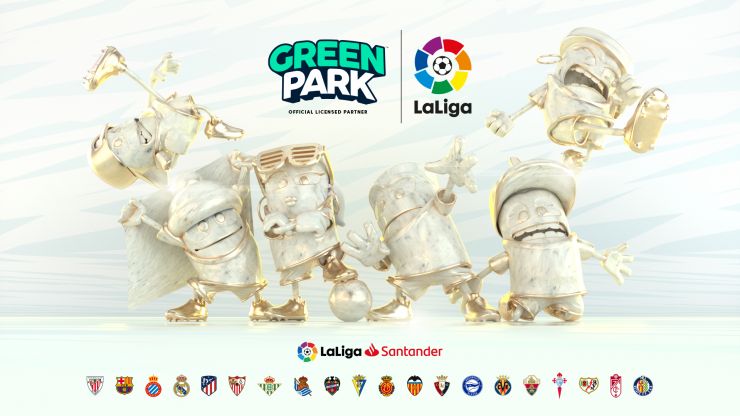 New league alert! GreenPark Sports, the fan-focused publisher and developer of mobile games and social experiences, announced today that the world-renowned Spanish soccer league, LaLiga has officially entered the GreenPark metaverse, available for download here! Alongside existing partners including National Basketball Association (NBA) and the Legends Championship Series (LCS), this new virtual land is available to soccer fans today, just in time for the start of LaLiga’s new season with a kickoff match between Valencia and Getafe tomorrow, August 13, at 12:00 p.m. PST.

Designed to engage next-generation soccer fans, the new multi-year partnership allows players to select any of the league’s 20 teams and prove their fan passion through various challenges and minigames. Recognizing the immense potential of their collaboration, the GreenPark and LaLiga teams have worked closely and quickly since originally announcing their global deal in December 2020. Timed to launch, the virtual land also features the likeness of some of the most skilled players in LaLiga, including jerseys from Sergiño Dest (Barcelona), Karim Benzema (Real Madrid), Iñaki Williams (Athletic Bilbao), and Gerard Moreno (Villarreal). Additional popular players such as Luis Suarez (Atlético Madrid), Diego Lainez (Real Betis) and Jesús Navas (Sevilla) will also have featured jerseys in the near future.

“GreenPark has a big vision for what the platform can bring to futbol fans around the world and LaLiga and its clubs represent some of the biggest brands in the sport,” said Ken Martin, GreenPark’s Co-Founder and CEO. “We are blown away by the forward thinking nature of LaLiga and its partnership team and are excited to build something together alongside other premier sports/esports properties, the likes of which the world has never seen.”

In addition to the app’s current offerings (fan parties, prediction battles, arcade games, and more), LaLiga fans have access to new features including:

“We’re excited to begin working with GreenPark and be present in their interactive metaverse,” said Oscar Mayo, Executive Director at LaLiga. “It’s very important for LaLiga to be close to our fans all over the world, and GreenPark’s platform affords us the opportunity to give them an experience in which they can interact with the league, our stars and the clubs. Plus, this partnership allows us to get closer to the gaming community worldwide and offer them the opportunity to follow the best soccer league in the world.”

GreenPark Sports creates immersive social platforms for the new generation of sports and esports fans. The free-to-play mobile app offers in-game experiences, allowing fans to battle it out through a variety of challenges and earn the undisputed “Best Fans” title of their league. Within the app, fans become an active participant in the live sports they love. GreenPark announced the launch of NBA in December 2020 and LCS in January 2020.