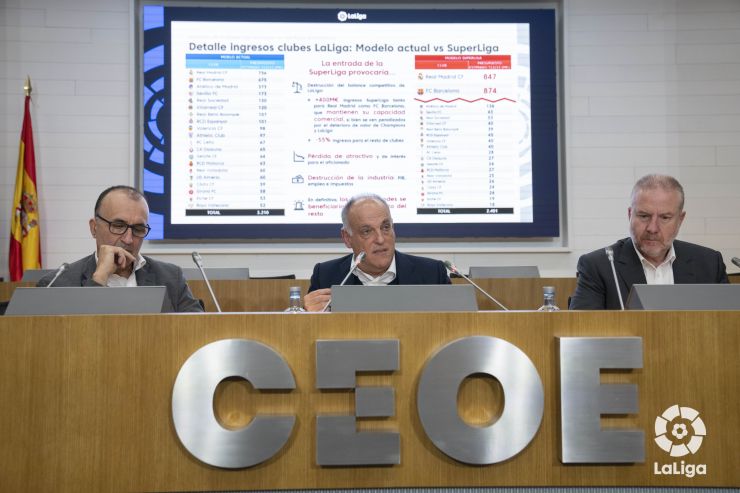 The creation of a separatist and elitist league would mean the end of the European national leagues, end a European tradition of more than 100 years and break the dream of millions of fans of national competitions

This was determined by LaLiga this morning during the presentation of the KPMG study on the economic damage caused by the European Super League and its impact on LaLiga and the professional football clubs in Spain.

LaLiga maintains that the creation of a league designed to enrich the biggest clubs and concentrate power among a small number of teams that already dominate European football would also lead to the loss of tens of thousands of jobs and drastically reduce tax revenues for the public purse across the continent. Likewise, the political authorities of the European Union, in this case, the Council of Europe has positioned itself against the Super League and the European Parliament has defended an open, democratic model based on meritocracy, supported by 87% of the votes.

Javier Tebas, president of LaLiga, at the headquarters of the Spanish Confederation of Business Organisations (CEOE) in Madrid where the KPMG report was presented, stated:“The format they are talking about is very detrimental to the national leagues, so they know that, if they explain it, the opposition to it will remain strong. Let's hope the Super League doesn't go ahead because it will destroy the local leagues and their supporters. We cannot allow football to be in the hands of the clubs with the most money, we have to find a balance".

KPMG's 2022 expert report estimates an overall revenue loss for LaLiga of up to 55%. Additionally, the loss of value for non-Super League clubs will be up to 64%. Numbers that, as LaLiga determines, are similar to those of other leagues in their proportion.

The domestic leagues account for more than 70% of revenues in European football and are basic components in the economic and sporting ecosystem of European football. The 40 European professional leagues and associations generate a total revenue of €25.725 billion with €11 billion in audiovisual rights.

Among LaLiga's main conclusions, based on the data from the KPMG report, the following should be highlighted:

· The domestic leagues in each country are the engine of the industry, accounting for more than 70% of the value of football in Europe.

· The Super League would destroy Europe's economic and sporting ecosystem, impacting the distribution of money between European clubs and federations.

· In the short term there will be an economic vacuum from the domestic leagues in favour of the Super League, a model that in the medium term will lead to reduced revenues for its own clubs.

· There is a successful model in Europe with a balanced ecosystem, which has allowed the creation of a large industry that the Super League would completely destroy. Reforms must be made, but the Super League is not the solution.

“We care about the rules of the court and what they say, but what matters most to us is the stability of our industry and if we have to fight for regulations that defend the stability of the European model we will do so. We do not want to be governed by those who have the most assets; we are more than the 20 richest clubs in football. We like models like the ones in Spain, LaLiga, where there is a distribution and we don't do what the clubs with the most assets have", Mr.Tebas emphasised at the presentation.

The Super League is proposing the same model as in 2019

The Council of Europe has taken a position against the Super League and the European Parliament has defended an open, democratic and merit-based model, backed by 87% of the votes.

According to analysis by LaLiga, the Super League would increase revenues by €400m for both Real Madrid and FC Barcelona, who would also maintain their commercial capacity. This also means a 55% loss of revenue for the rest of the LaLiga clubs, by creating a less attractive domestic league and decreasing interest for Spanish fans.

In short, the big clubs will benefit to the detriment of the medium and small clubs. This will increase the gap and the only beneficiaries will be the players of the top clubs, who represent only 5% of the players in LaLiga.

The Super League would also lead to the destruction of the industry: GDP, employment and taxes. The overall economic impact on broadcasting rights would reduce the relevance of domestic competitions by diluting the talent of top level teams in local leagues, increasing match congestion, with the possible moving of domestic matches to midweek.