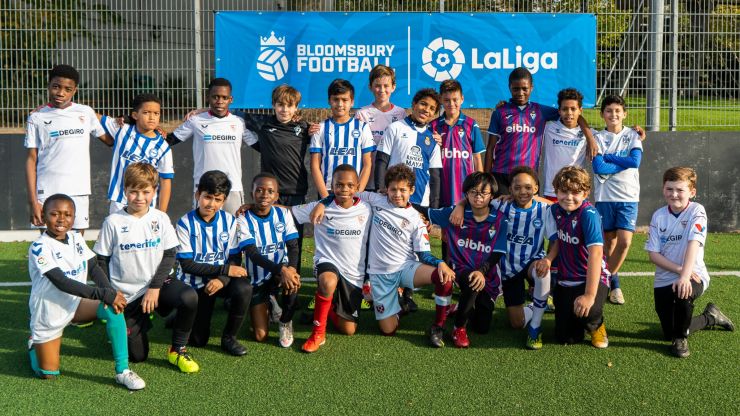 From November until June, local players aged 10 to 13 will have the opportunity to wear the colours of many of Spain’s most historic and celebrated clubs, competing in a league format each weekend, with assistance from Bloombsury Football and LaLiga’s foundation, Fundación LaLiga, who together are providing financial support for over 70% of all participating players.

“We’re thrilled to embark on our most ambitious project yet with LaLiga, operating a full-season competition in North London which provides an unparalleled football experience for young people of all backgrounds. Our partnership with LaLiga and its clubs is part of Bloomsbury Football’s continued mission to tackle barriers to participation and change the game for young people,” said Charlie Hyman, Founder & CEO of Bloomsbury Football.

“LaLiga and its clubs represent much more than world-class sport and entertainment. Through our overseas offices and our foundation, Fundación LaLiga, we seek to make a positive impact in local communities. In Bloomsbury Football, we have found an innovative community partner with whom we seek to contribute to young players’ health and well-being, all while celebrating the joy of Spanish football,” said Keegan Pierce, LaLiga Global Network Delegate in the UK and Ireland.

In May 2022, it was announced that LaLiga had joined forces via a multi-year agreement with Bloomsbury Football in support of the London-based grassroots charity, which uses the power of football to change the game for young people.

Their first collaboration consisted of a month-long tournament at Market Road Football Pitches (London Borough of Islington) in July 2022, which featured players aged 7 to 10 representing a half dozen Spanish clubs in a summer tournament format.

Looking ahead, both organisations are planning a girls’ football tournament in London for Summer 2023, ahead of the Women’s World Cup, alongside other community and educational initiatives.

The latest edition of LaLiga x Bloomsbury Football League is just one of several projects strengthening LaLiga’s ties to the United Kingdom, including the opening of a full-time London office and launching its own 24/7 channel (both in early 2020); as well as inaugurating LaLiga Camps, the league’s first UK-based player development initative, in Sussex in July 2022.

Founded in 2018, Bloomsbury Football offers an elite and accessible football experience for young people aged between 18 months and 18 years old. The organisation’s financial assistance model means that everyone is welcome, regardless of ability to pay or play.

LaLiga is a global, innovative and socially responsible organisation which is a leader in the leisure and entertainment sector. It is a private sports association composed of the 20 public limited sports companies (SADs) and clubs of LaLiga Santander and the 22 of LaLiga SmartBank, and is responsible for organising professional football competitions in Spain. LaLiga is the football competition with the most social media followers in the world, with over 158 million followers across 17 platforms in 20 different languages. With its headquarters in Madrid, it is present in 41 countries through eleven offices and 44 delegates. The organisation carries out its social work through its Foundation and was the world's first professional football league to establish a league for intellectually challenged footballers: LaLiga Genuine Santander.

Bloomsbury Football is a registered charity that is changing the game for young people in London, providing professional-level football coaching to improve mental and physical health, foster social cohesion and teach valuable life skills to over 5,000 young people a week. Bloomsbury’s mission is to provide every young person in London with the opportunity to access high-quality football training, and the charity has a financial model that means no one is turned away, regardless of background.  Currently, 50% of Bloomsbury participants receive free school meals, 55% are from BAME backgrounds, 1,500+ girls play with Bloomsbury per week and  95% of participants feel more confident & happier after playing with Bloomsbury. Working across Islington, Westminster, Kensington & Chelsea and Tower Hamlets, Bloomsbury Football is bringing football to London’s doorstep and is raising the bar for grassroots football standards in the capital city. Bloomsbury Football is a three-star England Football accredited club, a Kick It Out Equality Chartered Club, an FA-accredited Disability Recreation Centre and a London Youth Member.