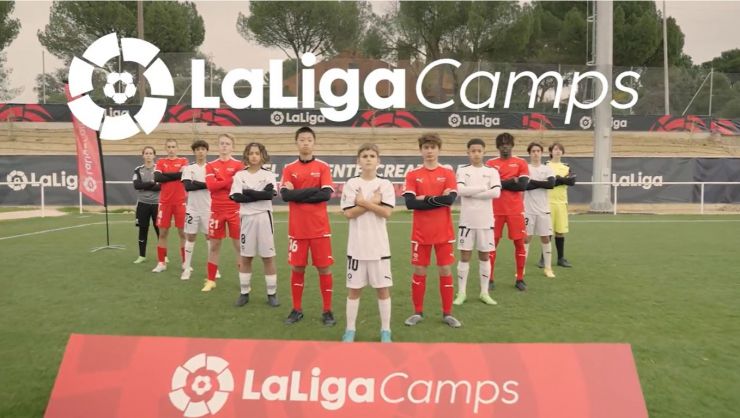 In July 2023, the complex will host the first summer camps of a major European league within its own facilities, where footballers from different parts of the world, and across all levels, will come together

LaLiga has officially opened registration for the summer camps that will take place in July 2023 at the ESC LaLiga & NBA complex in Madrid, which opened in September. This is a pioneering initiative, as there are no other camps of this kind run by any other major European league within its own complex which is dedicated to grassroots football. Thanks to the facilities at this state-of-the-art centre, participants will be immersed in the LaLiga ecosystem while being surrounded by a multicultural football environment.

LaLiga Camps arrives in Spain after success in various countries such as the United Kingdom, Japan, South Africa, Kuwait, Peru, as well as 8 different locations in the United States, from Dallas (Texas) to Las Vegas (Nevada). Around 900 male and female players of different levels and ages attended the courses.

The camps follow the LaLiga Methodology to help players on their way to reaching their full potential while enjoying a recreational summer experience with LaLiga. The camps, with options for either day or overnight stays, will last 1, 2 or 3 weeks, and aim to provide players of all levels, aged between 8 and 17 years old, with some of the resources and common elements that make the youth academies of LaLiga clubs a global benchmark. The Madrid edition also has several distinguishing features:

“One of the keys to the LaLiga Methodology is the integral training of the player, and in the case of LaLiga Camps, the pillars of our methodology are kept, thereby focusing on the technical, tactical, physical and psycho-emotional development of all participating boys and girls, always using football as an ideal means of transmitting values to the youngsters in a fun and educational setting,” states Juan Florit, Head of Sports Projects at LaLiga Grassroots.

“In addition to the 900 players who have already taken part in LaLiga Camps, the combined experience of the different LaLiga Grassroots programmes in more than 40 countries guarantees that more than 200,000 young footballers of different levels and ages have been trained. In addition, as part of our commitment to comprehensive training, we have included language workshops and the possibility of experiencing the camp in English. LaLiga coaches have international experience and are fluent in several languages, so the combination of academia and sports also applies to these short-term programmes,” says Javier Hernández, Head of Business and International Development at LaLiga Grassroots.

Registration for the programmes, as well as additional information on them, is now available via the website: https://www.laligagrassroots.com/camps