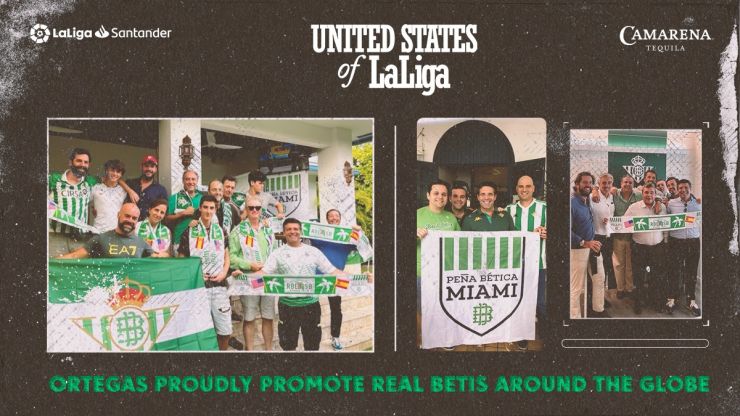 More than a decade ago, Alvaro Ortega was profiled in a segment on Canal Sur called “Andaluces X El Mundo” that features Andalusians around the globe

More than a decade ago, Alvaro Ortega was profiled in a segment on Canal Sur called “Andaluces X El Mundo” that features Andalusians around the globe.

Born and raised in Seville, Ortega studied at the University of Barcelona before traveling to Germany, Switzerland and ultimately, settling in Miami, Florida in the United States, where he met his wife and had three boys.

During filming of the segment, Ortega’s sons were all sporting Real Betis jerseys in support of their father’s favorite hometown club. After the episode aired, Ortega received a call from a man from Sevilla looking for the club’s Miami-based peña.

“I said, ‘What peña?’ Ortega recalls.

“I have to carry the name of Betis wherever I go,” he says. “At least Betis has a point of contact with me here if they ever need anything. We’re helping the club however we can.”

Ortega isn’t the only family member doing just that. Victor, the youngest of the four Ortega brothers, founded Peña Betica de Nueva York as well as Black Iron Burger where they meet in New York City. Across the Atlantic in Seville, Juan Manuel serves on the board of trustees of the Real Betis Foundation.

The Ortega’s relationship with Real Betis goes even further as the family owns almost 1% of the club’s shares.

Alvaro, who most recently watched his beloved Betis at Estadio Benito Villamarín defeat Ludogorets 3-2 in the Europa League on September 15 and top Girona 2-1 three days later in LaLiga, returns to Seville with his family at least three times a year for Christmas, Holy Week and during summer.

“I always tell my kids one day you might be living in Hong Kong or Shanghai or Wisconsin, wherever, but there’s two things you should never forget,” Ortega says. “First of all, your family’s going to be there and you’ll always have Easter week with them, and second, you’ll always have Betis.

“No matter where you are, take a plane and go there. The rest of the year, do whatever you want.”