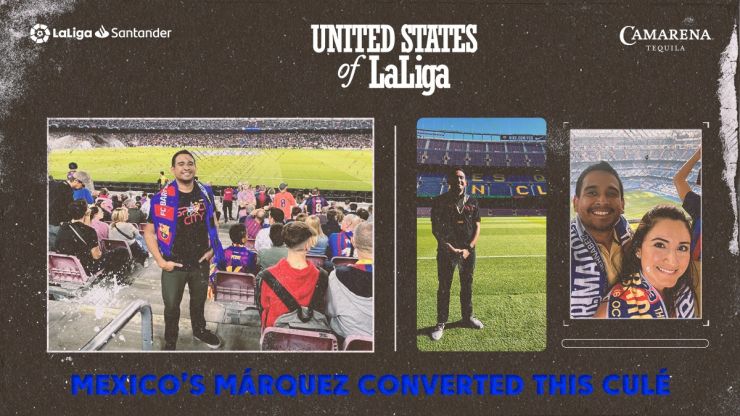 On July 9, 2003, Rafael Márquez signed with FC Barcelona for €5m. The signing was significant because the 24-year-old center back was the first-ever Mexican to represent the Catalan club

On July 9, 2003, Rafael Márquez signed with FC Barcelona for €5m. The signing was significant because the 24-year-old center back was the first-ever Mexican to represent the Catalan club.

“When he went out there, it was a big deal in Mexico,” FC Barcelona fan Eduardo Cabrera says. “Having a Mexican player abroad, it’s guaranteed you’re going to follow that team. The following year is when (Lionel) Messi played his first match and they had players like Ronaldinho, and the rest is history.”

Márquez, who played more than 200 matches for the Blaugrana, further etched his name in the history books by becoming the first Mexican to win the UEFA Champions League when FC Barcelona defeated Arsenal 2-1 in 2006.

For Cabrera, it was the beginning of his love story with the club, despite living in Houston, Texas. His interest and involvement grew as Barça continued to thrive led by its Argentinian talisman. Even in 2021 after Messi tearfully said goodbye to the club he called home for two decades, like millions of other culés, Cabrera continued his unwavering support.

He joined the Houston Culés with his wife, Claudia Giraldo, and even made his first trip to Spain earlier this season to see Barça’s new generation led by Gavi, Pedri and Ansu Fati. The couple sat “smack dab in the middle of the stands” to watch a 1-0 win against Celta Vigo on October 9 before returning to Camp Nou for the 3-3 draw against Inter Milan in the UEFA Champions League three days later; unfortunately, it wasn’t enough to send the home side through to the knockout stages.

Despite the result and a desire to extend their trip, they applied for tickets to El Clásico on October 16 at Santiago Bernabéu.

“We were there three weeks, but only planned about a week of it because everything was up in the air whether or not we got those tickets,” Cabrera says. “Surprise, we did! We got the tickets a few days before we left, so of course I was going crazy. I’m going to frame them.”

To make their trip even more memorable, Cabrera received a text from a friend back in Houston saying that they were spotted on the TV broadcast cheering in the stands during prematch warmups.