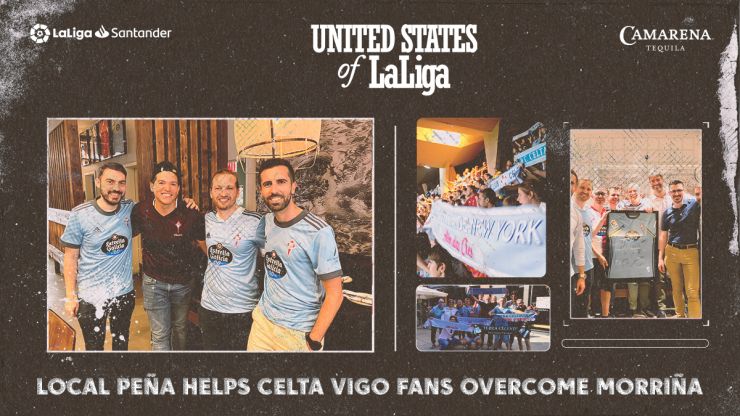 Andres Dono, who was born in Vigo, would feel homesick when he would set his alarm for 5 a.m. to wake up to watch his beloved RC Celta de Vigo from afar while he was living in the San Francisco Bay Area

In Galician, the word morriña describes feeling homesick. Andres Dono, who was born in Vigo, would feel this when he would set his alarm for 5 a.m. to wake up to watch his beloved RC Celta de Vigo from afar while he was living in the San Francisco Bay Area.

While cheering for his hometown club made him miss Spain and being at Balaídos in person, it also filled him with pride, knowing the dedication and commitment it took week in and week out to do so despite being nearly 6,000 miles away.

“Living abroad and following Celta, it really increases your passion because you don’t have as many chances to follow the team, you can’t go to the stadium every match,” Dono says. “In a way, it’s a connection you have with your hometown and it’s a source of identification with your roots and culture.”

Wanting to further that connection not only to Celta Vigo, but his childhood community, Dono sought to share his passion and culture with other fans, so when he relocated to New York City in 2022, he created Peña Celista de New York.

Not only is Dono afforded an extra three hours of much-needed sleep for early morning kickoffs due to the time zone differences between NYC and California, but he’s able to celebrate his favorite club with fellow fans.

Members of the peña meet at Tomiño, a Galician restaurant in Little Italy; in fact, the restaurant’s owners are also part of the Celta’s official New York/New Jersey supporters’ group.

“It crossed my mind a few times when I was in San Francisco to start a peña, but when I moved to NYC, there’s a community of Galician people and I thought, ‘This might be my chance,’” Dono says. “It’s always nice when you can share that passion and happiness with others. It’s nice to have a place where you can go, watch the game and talk about it and the club.”

“We all have this connection to the club or region.”

Not only does supporting Celta with fellow fans make for a better experience, but Dono is appreciative of LaLiga’s new broadcast partnership with ESPN in the United States. Long gone are the days of struggling to find broadcasts or radio streams online.

“As a small team, before it wasn’t easy to find the matches,” he says. “It was tough. It’s helped tremendously because it’s much easier for us to follow the club.”