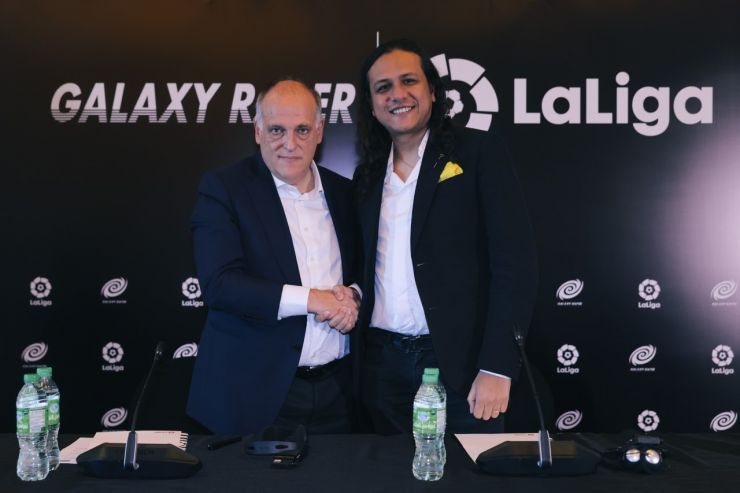 The JV establishes an historic first for the world of sports rights in the territories and positions GXR as LaLiga's local partner in the MENA and Indian subcontinent markets. The deal is expected to generate more than €3 billion in revenue. LaLiga and GXR will each hold a 50 per cent stake in the JV.

With more than 1.3 billion people under the age of 30 in the two markets, the deal will provide LaLiga with new ways to grow its brand and reach new audiences. It will also grant broadcast and media rights in MENA and Indian subcontinent, boosting viewership of LaLiga matches in the 29 countries in which the JV is in effect.

This is an especially important time for football in the region, as Qatar hosts the first FIFA World Cup competition ever to be held in the Arab world. More than five billion people worldwide are expected to watch the tournament.

Oscar Mayo, LaLiga Executive Director, said: “Signing this agreement is testament of our deep commitment to supporting the transformation of the sports media scene, and building on the passion for football in MENA and the Indian Subcontinent.

“I believe that touching the hearts of youth and empowering them to experience the unifying force of football is key to our success. Galaxy Racer’s experience will be vital in building fan loyalty to position LaLiga as a top brand for football and lifestyle.”

Galaxy Racer Founder & Chairman, Paul Roy, said, “We are absolutely elated to be a part of this historic joint venture. The MENA region and Indian subcontinent is considered one of the fastest growing territories in the business of sport and by partnering with LaLiga, a global leader in football, we are confident in our ability to work together to radically transform the sport league's brand presence in these regions, while also fostering the next generation of young sport fans.”

He added, "Several projects, including a documentary series, competitions, merchandise, live events, and activations, are already in the pipeline. Galaxy Racer presently has a sizable audience already in these areas, that we will leverage to elevate LaLiga to an aspirational brand.”

Maite Ventura, LaLiga’s Managing Director for the Middle East and North Africa, said: “Partnering with Galaxy Racer in the MENA region and Indian subcontinent is of great strategic importance to the La Liga brand and its continued expansion in these critical markets. GXR’s extensive experience in the region will also serve as an important source of support towards our international strategy. The Middle East is growing as a dedicated sports hub and the FIFA World Cup in Qatar now is the best example of the power of the sport.”

The JV in the UAE will see a team of around 20 people working to build the brand and find new business opportunities. There will also be a five-person Board of Directors that includes Chief Executive Officer (CEO) Maite Ventura. Luis Cardenas, Commercial Director for LaLiga MENA, will be the Chief Commercial Officer (CCO).

The JV will see collaboration with LaLiga representatives in Morocco, Egypt, Qatar, Saudi Arabia, Turkey, Israel, India, and the UAE, which is essential in achieving true regional development.

Galaxy Racer and LaLiga are already collaborating on a number of projects, including a documentary series, competitions, merchandise, live events, and activations.

Additionally, GXR will launch a roster of creators who will focus on LaLiga and curate creator events to promote the LaLiga brand throughout the whole year. The selected creators will exclusively represent LaLiga, touring the world to promote both themselves and LaLiga to fans everywhere, much like LaLiga's current football ambassadors do.