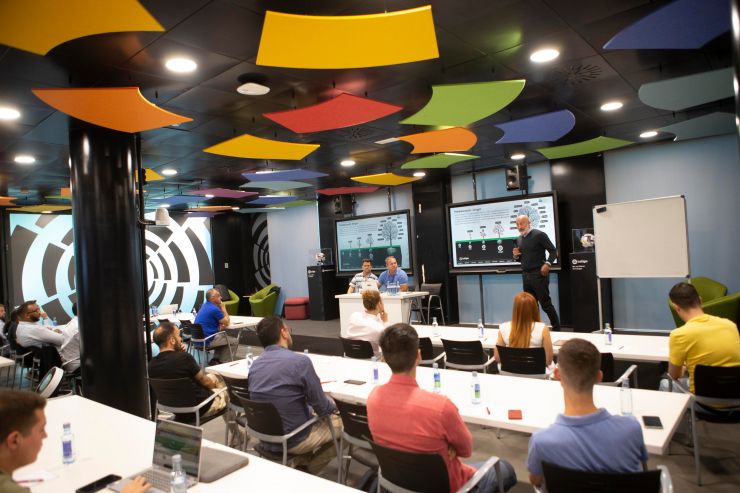 LaLiga has presented the advances made over last season to industry professionals at the "Mediacoach: LaLiga's advanced analytics solution" conference, organised in conjunction with Sport Data Campus. Experts from the areas of Mediacoach, Marketing & Digital, and Business Intelligence of LaLiga Tech spoke about different aspects of the work of data analysis and its evolution up until this season, showing some of the reasons why the Spanish football ecosystem is generating some of the best experts in data applied to football in the world.

Emphasis was placed on LaLiga's unique working method, which is unique on a global level, and where several factors have made it a pioneer in this field:  the organisation has the only analytics tool developed in-house, Mediacoach, which created a network of shared data between the 42 LaLiga Santander and LaLiga SmartBank clubs 10 years ago, thus democratising the competition and allowing the use of consolidated data for R+D+i. Furthermore, the creation of LaLiga Tech in 2021 attracted technological talent to the organisation's subsidiary, growing from 8 roles in 2014 to around 150 for the current season, particularly data engineers and developers. This has allowed LaLiga to create an internal team that combines top-level football experts, analysts and coaches with data scientists, so that these new advanced metrics solve a common problem in the industry of focusing too much on data without taking into account the peculiarities of the game or the technical, tactical and physical aspects.

This year, under the umbrella of the Beyond Stats advanced statistics project, LaLiga has gone one step further in order to maximise the power of Mediacoach, by seeking a visionary transformation of the football industry through the development of advanced analytics applied to football. As a result, this season the project has moved beyond the usual metrics, developing up to 24 new advanced metrics related to physical performance, goalkeeping, transitions, passing, positioning, pressing, dribbling and possession. This has been achieved thanks to a partnership with Microsoft, which has enabled Beyond Stats to leverage the machine learning technology and artificial intelligence power of Microsoft Azure.

These metrics have been made available to the technical staff of the clubs through Mediacoach, and also to the fans, an approach that, this year, has been enhanced through the integration of advanced analytics on television broadcasts thanks to the Goal Probability metric and the new web portal created as a result of the project, which offers fans new analysis for each LaLiga Santander matchday, and is completely free of charge, as well as being available in English and Spanish.

“Data science powerhouse LaLiga together with LaLiga Tech is leading the way globally in the use of advanced analytics in sport. Mediacoach is a game analysis platform which has been continuously evolving for a decade, characterised by its adaptability and data processing power. In this area we have generated more than 112,000 reports with almost 8 million pages of information and 1 billion metrics this season, focusing on three key drivers: pre-match, in order to design the match plan and prepare the week's work; in real time, as an aid to decision making during the match and even allowing the programming of customised alerts for the most relevant parameters; and post-match, which focuses on what has happened and allows for analysis of areas for improvement. The volume of data has saved thousands of hours of work for the technical staff, who previously had to review video clips manually. This season we have had 717 users at the clubs, from fitness staff to technical secretaries and, of course, coaches," says Ricardo Resta, director of LaLiga's Mediacoach area.

During the conference, LaLiga Tech's data scientists underlined the importance of the transformation phase of unstructured raw data into advanced statistics that can be useful for the technical staff and provide extra value for the fans. This has led many competitions outside Spain to become interested in purchasing Mediacoach, which has now started to be marketed worldwide through LaLiga Tech.

The raw data collected by Mediacoach is of very high quality, as the eventing data (objective recording of the most relevant technical-tactical actions such as shots, crosses into the box, substitutions and fouls, offsides) is complemented by the precision data collected by the 19 fixed perimeter cameras installed in each LaLiga stadium. 16 optical tracking cameras and 3 tactical cameras follow players, referees and the ball on the pitch, recording the position of each player 25 times per second to generate more than 3,500,000 pieces of data per match, and allow metrics related to speed or distance covered to be recorded.

Thanks to this tracking data, the LaLiga team has managed to enrich the eventing metrics with new algorithms and qualifiers that identify more specific match situations, coded and packaged into a library so that the eventing data is filtered through the new frame-by-frame model and generates advanced statistics. The most notable of these, in addition to the unique Goal Probability model, are:

Other outstanding examples that combine different data sources with a proprietary algorithm are: recoveries in advantage (when there are more teammates than opponents in front of the ball heading towards the opponent's goal when the ball has been recovered), and high intensity actions, which include those carried out at more than 21km/hour, a metric that LaLiga Santander leads the European leagues, reflecting the spectacular and competitive nature of its matchdays.