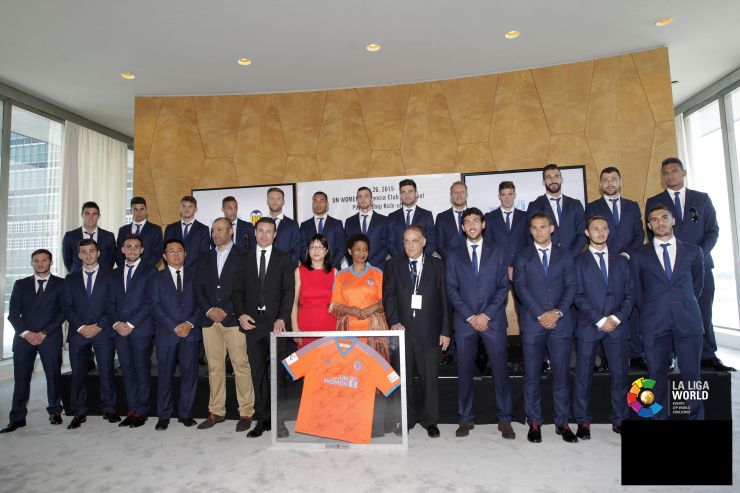 The co-operation agreement with the UN was signed in New York.

Four the next four seasons, the Valencia CF jersey will display the logo of a very special sponsor: UN Women, the United Nations Commission that fights for equality and women’s rights all over the world.

The agreement was announced in New York by the executive director of UN Women, Phumbile Mlambo-Ngcuka, and the Valencia CF president, Lay Hoon. The club’s chief executive, Amadeo Salvo, the LaLiga president, Javier Tebas, the Valencia squad and renowned ex-players, like Mario Kempes and David Villa, also attended the presentation.

"Thank you for wanting to help in the fight for the rights of women and girls. Sports teach values and life lessons which contribute to building a fairer and more peaceful world", stated Mlambo-Ngcuka, who lead the act in Valencia’s orange shirt, with the name and logo of UN Women on the back.

It will be the first time that this UN organisation collaborated with a professional sports side. "I’m proud to have a great group of men supporting this event", said president Lay Hoon during her speech. "Our contribution is necessary to fight against problems such as domestic violence and transform society". Skipper Dani Parejo spoke on behalf of his teammates: "We’re proud to be here. The Valencia players are committed to the spreading of this solidarity message".

Diplomats and journalists from all over the world were present at the act in which Amadeo Salvo described as "historic for the club. It is a project with a lot of repercussion both for the Valencia brand and image, as in the aspect of corporate social responsibility towards a group that needs us".

The Valencia squad will debut their new shirt this Wednesday with the UN Women logo in their friendly match against Columbus Crew in Ohio that forms part of the La Liga World tour.