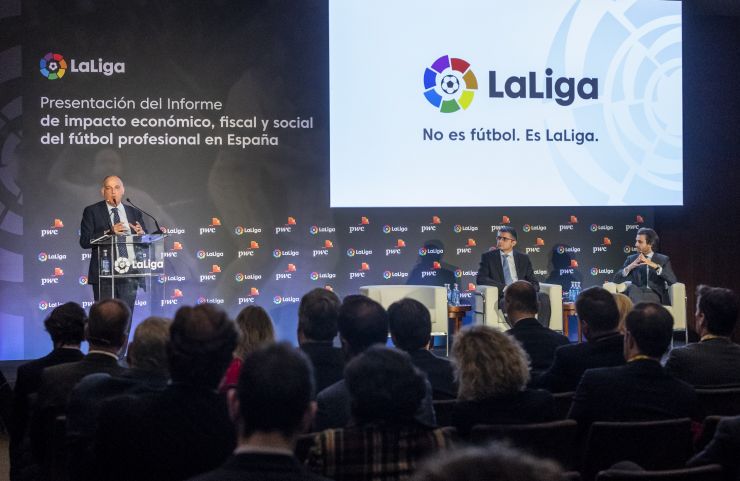 The professional football industry generates 185,000 jobs, €4.1 billion in taxes and a turnover equal to 1.37% of Spain's GDP

Consultancy firm PwC has compiled an independent report called the 'Financial, Fiscal and Social Impact of Professional Football in Spain'.

Consultancy firm PricewaterhouseCoopers (PwC) has presented today an independent study on the socioeconomic impact of the professional football industry in Spain, which generates a total of 185,000 jobs, €4.1 billion in taxes and a turnover equal to 1.37% of the country's GDP (gross domestic product).

The 'Financial, Fiscal and Social Impact of Professional Football in Spain' report, which was headed up and presented by PwC associates Jordi Esteve and Pablo Bascones, has been put together using the most recent data available from the 2016/17 season, replacing the previous version based on figures from 2012/13.

LaLiga president Javier Tebas analysed the results from the study, highlighting how "It confirms the enormous social and financial importance of professional football in our country and, subsequently, the importance of making responsible and well thought-out decisions about everything that affects an industry that is so relevant to our society".

The event was rounded off with a round table event involving the assistant advertising manager at España Global, Ester Borras, the Hosteleria de España secretary general, Emilio Gallego and the head of content at Movistar+, Ignacio Fernandez-Vega.

“Sports in general and professional football in particular are strategic sectors for the projection of Spain's reputation abroad, because in addition to the economic and social impact, it spreads the values of a modern and democratic society, such as the Spanish one”, stated Ester Borras.

Emilio Gallego added that “the important thing is the future to come, that is to say, the experience that the client perceives of football in a Bar or restaurant. That is what remains to be worked on, there is much more to be done in this regard”.

Lastly, Ignacio Fernandez-Vega explained that “football is a fundamental pillar of our offer. From Movistar+ we have a special relationship with all the agents involved in football: clubs, players... and we try to ensure that this relationship also reaches the final client, improving the experiences even for clients when they go to the stadiums. This connectivity, those infrastructure deployments that we do, help us create new businesses, digital environments, and a country that can develop in all areas”.

The results of the report conclude that employment has gone up by 28% compared with findings from the previous edition four years ago, fiscal contributions have increased by 41% and the contribution to LaLiga's financial activity has doubled.

The total turnover generated by the professional football industry in Spain in 2016/17 was over €15.69 billion, which equates to 1.37% of the country's GDP. This means that for every euro that LaLiga receives in turnover, an additional €4.20 is generated in the rest of the economy.

The industry's total contribution to employment was 185,000 jobs in 2016/17, with every job directly generated by LaLiga creating four more in Spain, covering an average of 0.98% of employed workers in Spain.

The 180,000 roles that have been created make up a considerable number of jobs linked to other sectors and activities in the Spanish economy. For example, if we compare with employment generated within the textile, manufacturing and leather industries, it is the equivalent of 1.2 times the number of people employed in 2016 or 2.4 times the number of workers employed in metallurgy and the manufacturing of iron, steel and ferroalloy products.

LaLiga generated additional revenue in other sectors such as catering, accommodation, bars and domestic tourism of almost €4 billion. In terms of the impact generated by football in other areas of the economy, the contribution to catering, transport and accommodation linked to sporting events held at stadiums stands out, with it reaching €2.4 billion in the 2016/17 season.

Besides the impact generated by stadium visitors, high viewing figures for LaLiga matches helped Spanish bars take in around €1.23 billion, generating 19,415 jobs in the process.

Football fans also enjoy watching matches on TV through subscription packages. 58% of the 6.6 million subscribers have football included and 41% of them would not subscribe if the beautiful game was not available to them.

A survey involving over 800 people was carried out in order to understand LaLiga's positive influence on Spanish society through football. 79% of participants feel that professional football in Spain positively influences social relations and almost 70% consider it to have a beneficial effect on family relations.

According to the study, professional football promotes values in Spanish society, such as responsibility, development, integrity, camaraderie, respect and sportsmanship.

Furthermore, 78% believe that professional football in Spain has a positive influence on the Spanish brand, ahead of other sports, such as tennis and basketball.