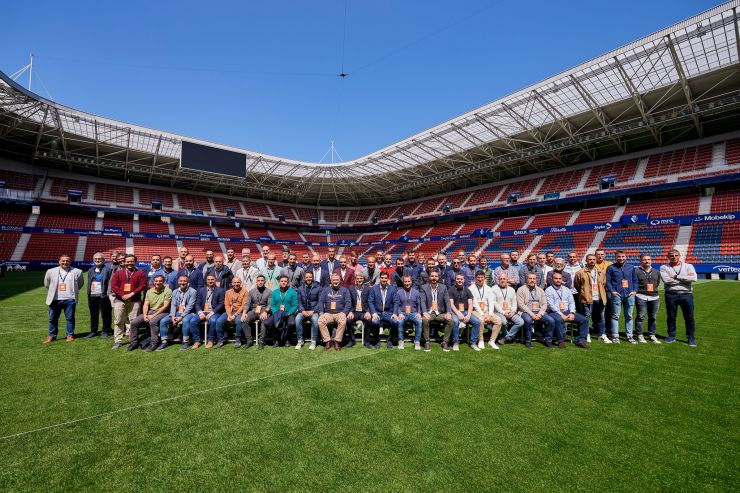 LaLiga presents an ambitious National Plan for the Optimisation and Improvement of Youth Academies, linked to Boost LaLiga

This is the first time that national grassroots football has launched a collective plan to promote the Spanish youth academies, which are already a global benchmark. The Plan was presented at the 6th Academy Meeting in Pamplona, hosted by CA Osasuna.

LaLiga has presented the National Plan for the Optimisation and Improvement of Youth Academies to its clubs, a plan that outlines the strategic issues and areas for improvement to take national grassroots football to a new level, for the first time with a structured plan arising from the collective effort from LaLiga Santander and LaLiga SmartBank clubs. The Plan was presented at the 6th Academy Meeting in Pamplona, with CA Osasuna as hosts at the recently acclaimed Best Stadium in the World 2021: El Sadar.

The Plan, a turning point in the history of Spanish grassroots football that marks the culmination of 6 years of work, has been designed around the work carried out hand in hand with the clubs. Areas for improvement have been identified, thanks to the knowledge-sharing networks that have been developed by the Youth Academy Meetings since 2016, with the aim of professionalising the teams' youth academies. What are the keys? To design a joint project that bridges the gap between clubs, increasing competitiveness and standards collectively, and to achieve sustained growth by laying foundations that, together, will in turn contribute to boosting professional football in the long term, optimising resources and processes.

The National Plan for the Optimisation and Improvement of Youth Academies is linked to the Boost LaLiga Plan, which seeks to accelerate the growth of Spanish football and also emphasises aspects such as investment in technology and infrastructure, two essential aspects for youth academies. In this respect, many clubs will be able to accelerate some of the initiatives and actions planned for their youth teams thanks to Boost LaLiga, achieving their objectives much earlier, or even launching projects that would have not been otherwise possible.

"We at LaLiga are expressly committed and responsible for playing a part in the achievement of the clubs' goals by establishing this project. We have identified a number of indicators for several strategic areas that have a direct impact on the work of the youth academies, and will work with each club to define the final targets based on their different circumstances, according to their strengths and weaknesses, as well as identifying opportunities for improvement for each of them. The areas and indicators that make up the plan are the result of several years of study and analysis, both individual and collective, carried out by LaLiga, and the achievement of the objectives is a long-term proposition, with an emphasis on qualitative rather than quantitative elements: We are committed to quality and sustainable growth through an ambitious but realistic vision," says Juan Florit, head of Sports Projects at LaLiga.

"The visionary element is the key to the Plan: working collectively will achieve much greater growth for the whole of grassroots football by bringing together the strengths of all the successful individual initiatives that clubs have been undertaking in recent years. The clubs have also shown a great willingness to collaborate and share knowledge and ideas, because they understand that this is something that will benefit everyone and help Spanish football to grow as a whole,” says Luis Gil, director of Competitions at LaLiga.

A milestone for Spanish youth academies: Its five principles

The Plan is based on 5 strategic areas, each one made up of a series of indicators for which medium and long-term objectives will be defined with the clubs:

1 - Infrastructures and resources. One of the key areas of the Boost LaLiga Plan, which is particularly relevant in the case of youth academies: It is recommended that investment be made in adequate infrastructure, such as the improvement of training centres, and technological tools, an area in which LaLiga will also make various resources available to the clubs, such as the LaLiga Academy Manager software, created by LaLiga Tech, LaLiga's technological subsidiary. In addition, the use of technology and big data will be promoted among the youth teams.

2 - Comprehensive care for the player: A differential area of the Plan, which points out the need to approach player training from a holistic point of view, not just a sporting perspective. In particular, attention will be paid to their academic and personal development, as well as psycho-social and mental health care. In this area, targets will be set with each club, for example, in terms of youth players studying at university or high school. LaLiga thus reiterates its commitment to academic training in youth academies, which it enhanced in 2019 with the launch of the LaLiga ProPlayer programme, which offers scholarships to youth academy players to combine sport and study at universities in the USA.

3 - Development and transition to professional football: An area that will reflect the success of the initiative and which represents a commitment by the clubs to more sustainable growth of their professional teams through their youth academies, the identification and retention of talent in Spain and greater financial prudence in the transfer market. The plan includes as indicators of long-term success, youth academy players who form part of the first team, players called up to national teams or those who end up playing for clubs in the five major European leagues.

5 - Structure and professional development: The focus is on the professionalisation of youth academies, characterised by one key element: even more demanding requirements in terms of training, specialisation and stability of the technical staff, ensuring a more professional and high-quality structure. LaLiga has been working in this direction in recent years through the LaLiga Training Hub, a training space for youth academy professionals promoted by the organisation through the use of collective intelligence and the creation of a space for interaction between the 42 LaLiga Santander and LaLiga SmartBank clubs.

The Plan could not come at a more appropriate time: the LaLiga clubs' youth academies are already leading the way globally. LaLiga currently ranks first among European competitions in terms of minutes played by its youth players according to the latest studies published by the CIES Football Observatory in 2022 (with an average of about 17% of total minutes), and the clubs in the competition consistently top individual positions in minutes played by their youth players (7 of the top 10 clubs last season).