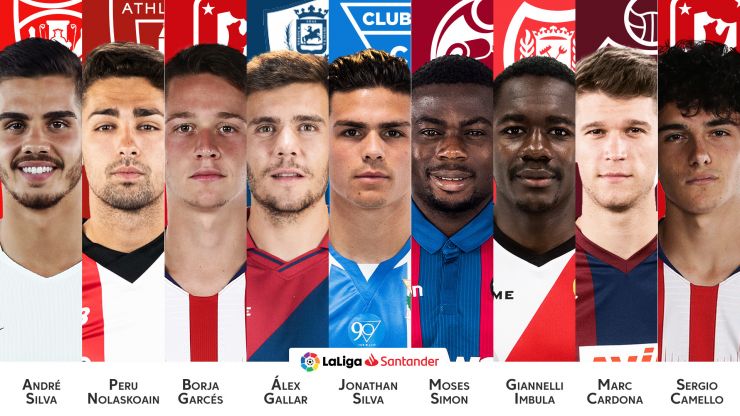 Who marked their debut with a goal in the 2018/19 LaLiga Santander season?

A total of nine players got their goalscoring accounts up and running in their maiden outings in the best league on the planet, with Atletico's Sergio Camello the last player to find the net on his debut.

The day of their LaLiga Santander debuts and first taste of the greatest league in the world is one that will forever be etched into the memories of many of the competition's stars. This landmark event may be remembered for a whole host of reasons: a victory for their team, the stadium, the teammate they entered the fray for, the goal they scored or the assist they provided. Over the course of the 2018/19 campaign, nine LaLiga Santander aces marked their league bows with a goal as they capped off a magical day in the best possible fashion.

Andre Silva turned in one of the best debut performances ever witnessed in the Spanish top flight, with the Sevilla FC sharpshooter helping himself to a hat-trick in the Andalusians' 4-1 romp at Rayo Vallecano back on Matchday 1. In that same round of fixtures, Alex Gallar was SD Huesca's two-goal hero as the league newboys recorded their first-ever LaLiga Santander triumph in their trip to SD Eibar. Elsewhere, Athletic Club's Peru Nolaskoain claimed a debut goal in Athletic's season opener as he nodded home to break the deadlock in the Basques' 2-1 success over CD Leganes.

Jonathan Silva, Marc Cardona, Giannelli Imbula, Borja Garces, Moses Simon and Sergio Camello complete the list of players who netted in their first LaLiga Santander appearances. Atletico Madrid are the club with the most representatives in this particular list, with Borja Garces and Sergio Camello both on target on their bows. The latter clocked up his first minutes of LaLiga Santander action on the final matchday of the season and he struck late to salvage a point for Los Rojiblancos in their 2-2 stalemate at Levante UD.