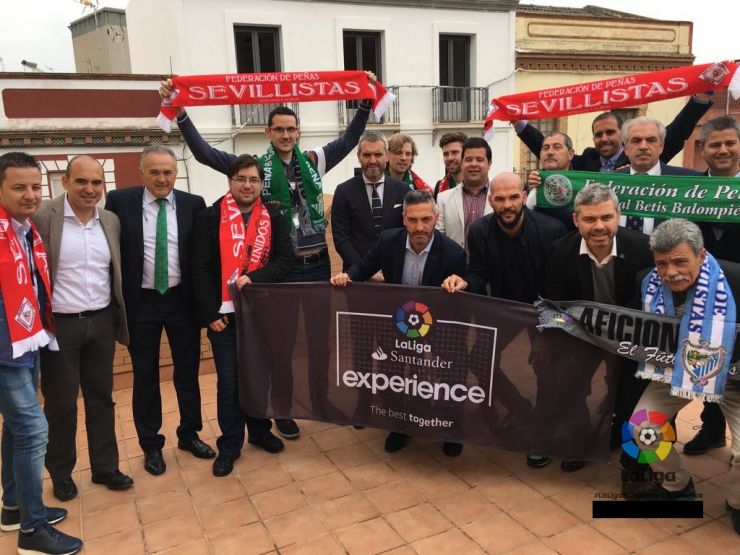 It’s one of the biggest city rivalries in the world, and you have to live it to believe it. Six lucky visitors from Sweden and Romania did just that thanks to the LaLiga Santander Experience.

Four contest winners and two journalists from VIASAT SPORT and DIGI SPORT enjoyed an unforgettable weekend in the heart of Andalusia, where they experienced the Seville derby in a uniquely personal way.

Their stay started with an escorted tour around Real Betis’ famous Benito Villamarín stadium, which included visiting the changing rooms and walking out on to the pitch, where they were greeted by club officials and two players from the Betis Women’s team.

The build-up continued with a sight-seeing tour around one of Spain’s most iconic cities and gathered pace when the visitors were guests of honour at an official Betis Peña (supporters’ club). They heard stories first-hand about what makes the Seville derby so special, and were introduced to former players Arzu and David Rivas.

Once at the game, the excitement rose to new levels as the guests were able to witness first-hand as the players arrived by coach and went to their respective dressing rooms. Then it was out to pitch-side where they watched the players warming up before kickoff.

A Seville derby is one of the biggest rivalries in world football, and the match did not disappoint in a fevered atmosphere full of drama. As one guest said: “I keep thinking it can’t get any better, but it keeps getting better!” After the game, the journalists had the opportunity to get exclusive content for their broadcasters, even had the chance to interview the Romanian R. Betis player Alin Toșca, while the contest winners were able to experience a post-match mixed zone, as the LaLiga stars exited the stadium.

The smiles on everyone’s faces after the game told their own story!