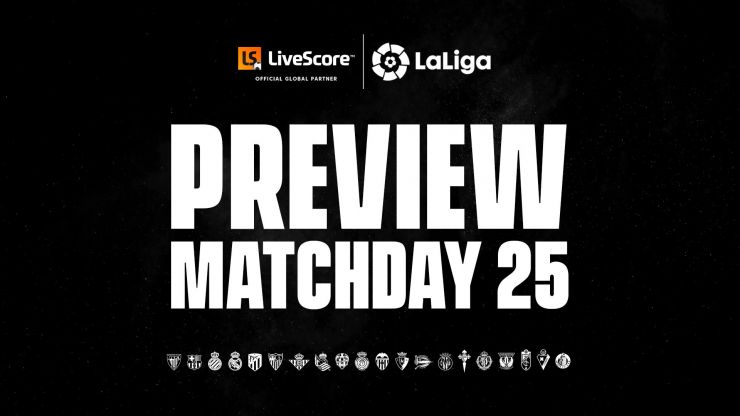 Real Madrid and FC Barcelona both look to continue their form in the title race, while Getafe CF face Sevilla FC and Atlético de Madrid host Villarreal CF in two big games in the race for Europe.

Real Madrid’s 2-2 draw at home to RC Celta on matchday 24 ended a run of five-straight LaLiga victories. Despite the setback, they remain top of the table, now just one point clear of second placed FC Barcelona. This weekend, Real travel to face Levante UD at the Estadi Ciutat de València. Sitting in 13th place, the home side have lost four of their last five LaLiga matches, leaving them in danger of being dragged into a relegation battle. Levante have only beaten Real Madrid once in their last 14 league meetings, with their last home victory over them coming back in 2011.

FC Barcelona closed the gap at the top of LaLiga to just a solitary point after their home victory of Getafe CF last weekend. Lionel Messi has registered six assists in his last three games and the home side will look to him for inspiration once again as they welcome SD Eibar. The visitors sit just three points above the bottom three in 16th place in the table, having won just one of their last five outings. As they play before Real Madrid on Saturday afternoon, FC Barcelona will see this as a perfect opportunity to apply pressure to their title rivals and will be confident of picking up the three points having never lost in the league to this weekend’s opponents.

Arguably the game of the weekend sees third placed Getafe CF host fifth placed Sevilla FC in what could prove a vital game in the race for Europe qualification. The home side suffered only their third loss in 14 league games when they fell to a 2-1 defeat away at FC Barcelona last weekend, a result that leaves them two points ahead of Atlético De Madrid and Sevilla FC in fourth and fifth respectively. Sevilla arrive at the Estadio Coliseum Alfonso Pérez having won only one of their last five league matches and without a win in three. The two teams have been well-matched in recent meetings, with both sides winning two of the last five league encounters.

Atlético de Madrid were held to a 10th LaLiga draw of the season last weekend as they were twice pegged-back away to Valencia CF in an entertaining 2-2 game. Having won only one of their last five league matches, they will be hoping for a change in fortunes as they welcome sixth placed Villarreal CF. The visitors would leapfrog Atlético with a win this weekend and will be in high spirits having won three of their last four league matches. With both clubs fighting for a top four spot, the result of this game could be key come the end of the season.

Follow all the results and the standings from the second round of matches in LaLiga Santander on www.livescore.com