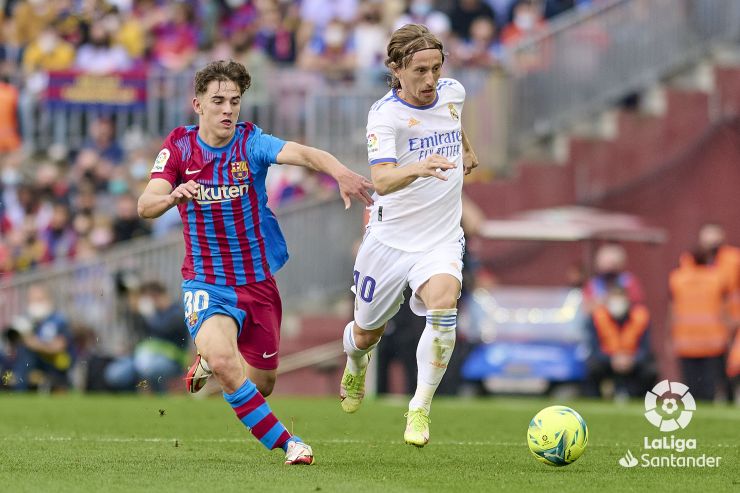 El Clásico, position by position: Two of the most powerful teams in the world face off

Real Madrid and FC Barcelona will face each other in ElClasico this weekend, with some of the best players in the world taking part in duels across each line.

Real Madrid and FC Barcelona are currently standing tall at the top of the standings in LaLiga Santander, with this season having started very evenly matched as the teams look to prove their quality and show what they are capable of. Los Blancos and Los Culés will now face each other in one of the matches of the year, in ElClasico on October 16th, a great contest in which we’ll be able to see fascinating duels across all lines.

In goals, Thibaut Courtois and Marc-André ter Stegen are two of the best shot-stoppers in the world. Ter Stegen has conceded just one goal in eight games played in the 2022/23 season, compared to six goals conceded by the Belgian in the six games he has played. Still, Courtois was one of Real Madrid's heroes last season and is the overwhelming favourite to win the Yashin Trophy, which will be awarded the day after ElClasico.

In defence, there are two quality back fours, one of Dani Carvajal, Éder Militão, David Alaba and Ferland Mendy and one of Jules Koundé, Ronald Araújo, Eric García and Marcos Alonso. With Real Madrid's defence, this is the second season this unit has played together, after winning LaLiga Santander and the Champions League in their first year without Sergio Ramos and Raphaël Varane. Alaba scored in his first ElClasico last year and has started all but the first game of the competition this season, when he came off the bench to score a freekick.

Barça's defence has been reinforced with signings (Koundé, Andreas Christensen, Marcos Alonso and Héctor Bellerín) that are working to perfection, as evidenced by their goals conceded figures in LaLiga Santander. Koundé and Araújo, two 23-year-olds, already form a duo that gives FC Barcelona fans hope for the future, although, unfortunately for Xavi, both are injured and could miss the clash against Real Madrid. For these kinds of unwanted situations, the two coaches have players of proven quality who can fill in, such as Gerard Piqué and Antonio Rüdiger.

In midfield, Aurélien Tchouaméni, Toni Kroos and Luka Modrić will be going up against Sergio Busquets, Pedri and Gavi. Tchouaméni is one of the players with the most recoveries in LaLiga Santander, with 15 in total, and, alongside him, he has one of the players with the most passes in the competition: Kroos, with 437 passes in his six games so far this term. Over at FC Barcelona, their midfield is the same as that of the Spanish national team. Their trio know each other very well and have very similar origins: two of them are Barça academy graduates and the other, Pedri, arrived at the club at a very young age. Beyond the starters, in ElClasico we could see other quality players such as Eduardo Camavinga or Frenkie de Jong, who’ll be ready to come in at any time.

Looking at the attacking lines, Karim Benzema and Robert Lewandowski will do battle in LaLiga Santander for the first time. Both lead the ranking for the most shots in the competition so far, as the Pole has taken 31 shots and the Frenchman 28. They will continue to fight to become the players with the most goals scored. Lewandowski has already scored nine goals, impressing everyone with his first few games in Spain. Benzema, meanwhile, has netted three goals in his five LaLiga Santander games so far.

Partnering the Frenchman, there’s Vini Jr. The Brazilian is the player with the most dribbles in the competition (62 so far this season) and, for the moment, he is Real Madrid's top scorer too (with five goals scored). On the other flank there’s Fede Valverde, a player who has earned his place in the team and the confidence of Carlo Ancelotti and who, along with Vini Jr, was the creator of the goal that earned Los Blancos the Champions League title last year.

Lewandowski will also be well supported on the wings by Raphinha and Ousmane Dembélé. Dembélé is the Blaugrana's top dribbler and has two assists to his name. On the other flank, the Brazilian

Raphinha, signed this past summer, has already earned himself a place as an undisputed starter in Xavi's line-up.

The Catalan club will have some top-quality substitutes such as Ansu Fati, one of the top assisters in LaLiga Santander with three assists already, or Ferran Torres. At Real Madrid, Ancelotti will be able to count on Rodrygo at any time.

Neither Real Madrid nor FC Barcelona have lost a single match this season in LaLiga Santander. Sitting together on the same number of points at the top of the table, they’ll now face each other in a match that promises to be one of the biggest games of the year.