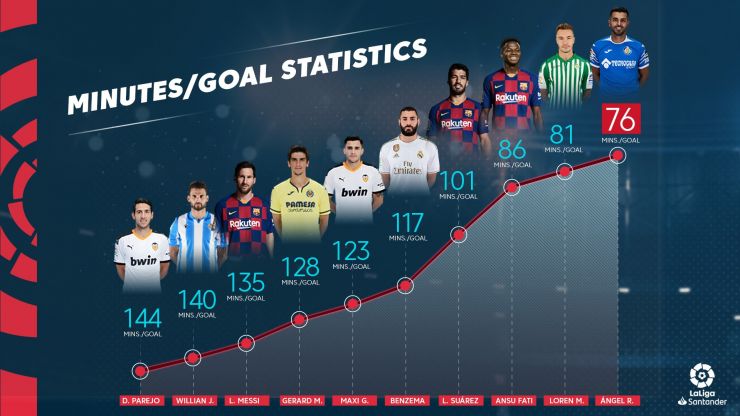 Which player has the best goals to minute ratio in LaLiga Santander 2019/20?

Angel is closely followed by the division’s top scorer – Loren Moron of Real Betis – and 16 year-old sensation Ansu Fati, who has found the net twice for FC Barcelona in just 172 minutes of playing time.

Some may be surprised to see six-time LaLiga Santander top goalscorer Lionel Messi only in eighth place, but after an injury-curtailed start to the season, the FC Barcelona superstar is finding his top form and has scored in his last two matches. He averages a goal every 135 minutes.

LaLiga Santander is home to some of the most prolific attacking talent on the planet; the aforementioned Messi as well as the likes of Luis Suarez and Karim Benzema, both of whom are also in the top 10. However, having scored four times in just 304 minutes, nobody can match Angel for efficiency. The 32 year-old averages a goal every 76 minutes for Getafe CF.