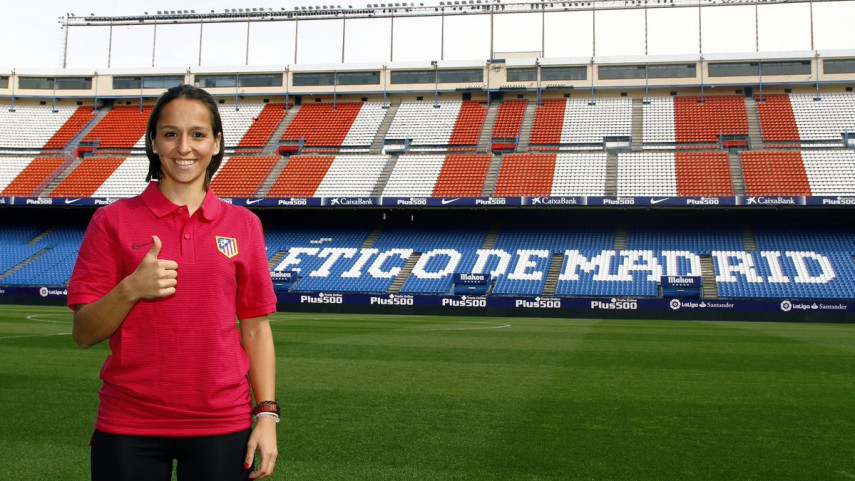 Marta Corredera: "I feel happy here and am looking forward to achieving big things with Atletico"

The forward, who recently signed for Las Rojiblancas, returns to Spain after a season in England and is eager to show how much she learned abroad, whilst aiming to regain her place as one of the stars of the Spanish women's game.

At 25 years old, Marta Corredera's CV reads impressively - the Spanish national team, CE Sabadell, RCD Espanyol, FC Barcelona, Arsenal and now Atletico Madrid. She has enjoyed a glittering career, full of trophies and personal triumphs, while continually learning as a player and person. Her career saw her head to England where she continued her development, and a year and a half later, she returns to her homeland with the aim of adding to her trophy cabinet and fulfilling her dreams with the Madrilenians.

Hailing from Terrassa in Catalonia, Marta has always been in love with the beautiful game. Football is in her blood. From the age of five, she has always had a football glued to her feet. "When I was five I was already running around the pitches at Terrassa and at the age of eight, I signed for Sabadell. I have great memories of that time, as a kid I loved it with a passion and I went on to make my debut when I was 14," Corredera tells LaLiga. Four years later, Marta made the move to the top flight of Spanish football. Espanyol came calling, and it was there that she won her first silverware. Yet it was at city rivals, Barcelona that Corredera enjoyed the most fruitful period of her career so far. "I signed when I was 19, and it was a fantastic time on both an individual and collective level." Indeed, she has nothing but good things to say about her five years with Las Azulgranas: "Without a doubt, it was the most successful spell of my career to date. We won a lot of silverware, but there was far more to my time there thanjust the trophies. We smashed records and competed in the Women's Champions League for the first time, and I particularly remember our playing style, we understood each other's games perfectly. We had a superb team," recalls the Spanish international. During a trophy-laden stint with Las Blaugranas, the striker picked up four league titles, three Copa de la Reina crowns, as well as making her Champions League bow.

Translation: Marta Corredera made her first start against Athletic: "I'm delighted to make my debut but above all else for the team's victory"

In football, it's often said that when one door closes, another one opens and that was certainly true of Corredera's switch from Barça to Arsenal. "It was time for me to take a step up, make a change and try something new. I wanted to test myself. It was a challenge for me and I went all out to make a success of it." Her arrival at Arsenal saw her join the club's Spanish contingent, as she took her place alongside Natalia Pablos and Vicky Losada and played under Pedro Martinez Losa. Corredera's decision to up sticks and head to London proved to be a successful one, "the highlight of my time there were my teammates, I came away having made many great friends," although, as Marta notes, just like with any new adventure, it wasn't all plain sailing. "The toughest part was being so far away from my family and my partner. Whenever they got the chance, they jumped on a plane, but it's not the same. It hurts when you miss out on birthday celebrations and special parties… and, above all, not to be able to ask for a hug when you really need one." In addition to the silverware she won in England, Marta returns to Spain having learned a great deal: "On a professional level, I gained an appreciation that you really have to give 120% day in, day out, regardless of the situation." Ultimately Marta decided to return to Spain, as she looks to continue developing her game. "In the final few months at Arsenal, I didn't play as much as I would have liked to, and that ended up affecting me off the pitch. I'm now really excited about what lies ahead."

Thank you so much @ArsenalLadies, it has been a pleasure wear that t-shirt. Always a gunner!

As Marta herself recognises, it's now time for her to relish these fresh challenges and embark on new dreams. Having checked in at Atletico, she has renewed hopes for the future: "I'm happy, excited and am looking forward to achieving big things with this team. It's a major challenge, a lot is expected of this squad and that serves to drive us on even more. But above all, I want my approach to the challenge to allow me to enjoy every single moment, that's the only way that I'll be able to look back and appreciate what I've done".  Corredera took her place in the Atleti starting XI last time out against Athletic Club, in which she offered some early glimpses of her electric pace and undoubted quality. Marta Corredera is back, and she's here to stay.