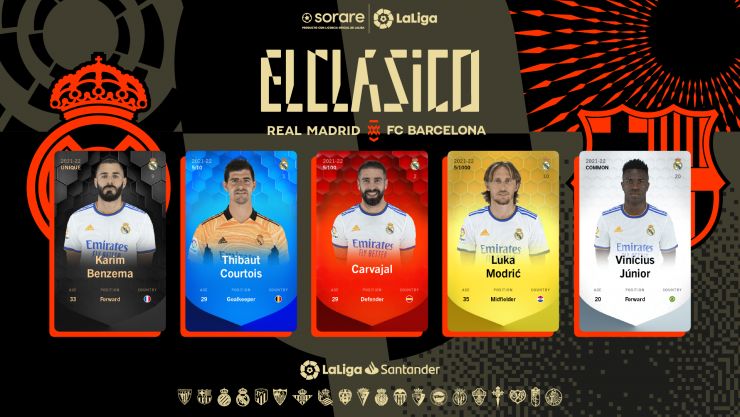 The new stars of ElClasico by Sorare

Real Madrid vs FC Barcelona is a match that every footballer aspires to play in. The following players have either already experienced their first ElClasico this season or will be getting their first chance to do so this Sunday in this clash of titans

Their first ElClasico in the Santiago Bernabéu as Real Madrid players

Eduardo Camavinga and David Alaba have more than won the hearts of Los Blancos fans since joining last summer. Both have the knack of firing up the watching fans at the Bernabeu when the team need them most. This Sunday 20 March, these two recent arrivals will get the chance to experience one of the games that leaves an indelible mark on the career of any professional who has been lucky enough to play in one: ElClasico in LaLiga Santander. What’s more, this time around it’ll be in front of their own fans.

Camavinga is only 19 and yet when he takes to the field it feels like he’s been playing for Real Madrid his entire life. The French youngster is bursting with quality, power, confidence and presence of mind at the heart of Los Merengues’ midfield. Camavinga has played 18 games so far this campaign, starting seven of them, notching up 675 minutes in total. He’s scored twice so far this season: this includes a debut goal and a screamer against Real Sociedad two matchdays ago. The midfield general might well make his ElClasico bow this Sunday.

David Alaba has become a mainstay at the heart of Real Madrid’s defence despite only having joined the club last summer. The Austrian centre-back exudes calm and self-confidence which rubs off on his teammates and he commands a great deal of respect from his opponents. Carlo Ancelotti’s side brought in Alaba knowing that his vast experience would be of great use to the club. The number four has become one of the first names on the teamsheet, starting all 25 LaLiga Santander games in which he has featured. One of the most memorable of these performances was indeed against Barcelona at the Camp Nou, where he scored his first goal for the club against their arch rivals. The 29-year-old is keen to replicate such a performance in the second ElClasico of the season, this time in front of the Real Madrid faithful.

Xavi Hernández’s side bolstered their ranks over the January transfer window, bringing in top-class players who are perfectly suited for these kinds of high-profile encounters. While Sunday’s LaLiga Santander match will be Xavi’s first in his capacity as first team coach, he’s more than used to this fixture in the calendar. The Barcelona boss holds the record for most ElClasicos played in - 29 - alongside ex-teammate Lionel Messi. Yet for the following footballers this weekend’s encounter could be their bow in this prestigious fixture:

It may be early days for Pierre-Emerick Aubameyang at Barcelona but he’s settling in very well and doing what he knows to do best: score goals. The Gabonese forward joined in January with the aim of contributing to the club with his know-how and goalscoring instinct. The 32-year-old has featured in over 500 matches as a professional footballer and has claimed almost 300 goals. Aubameyang is now one of Barcelona’s greatest threats in attack; he’s already struck five times in his first six appearances for Les Cules. The highlight of these performances was his three goals against Valencia CF away at the Mestalla; he became the quickest player ever to score a hattrick for the club. All of the aforementioned leads us to suggest that Xavi will be calling upon him in attack in this Sunday’s ElClasico in LaLiga Santander.

Adama Traoré knows what it means to represent FC Barcelona against their arch-rivals. The wing-back came through La Masia and faced Los Blancos on various occasions during his rise through the club’s ranks. After a spell in England the 26-year-old decided to come back to Barcelona, accepting the challenge of starring for his boyhood club’s first team. This Sunday 20 March he’ll get the chance to play in a game he’s been dreaming of since childhood: ElClasico at the Santiago Bernabeu. Since coming into the club he’s featured five times, starting three of these games, providing two assists so far. The Spanish international is wowing fans with his ability to create danger through his sheer pace, strength, drive, and dribbling skills. Real Madrid’s defenders will have to keep a keen eye on Traore’s marauding runs down the flank this Sunday.

Ferrán Torres isn’t only a great future prospect for Barcelona; he has so much to offer the club right now. The 21-year-old is back in Spanish football and is keen to make his mark with the Catalans. The Valencia-born youngster has started six of the seven games he’s played so far for Barcelona and in the last two matches he has found the net three times. This includes a brace he netted against CA Osasuna which he managed to do within the first half an hour of the game. If he takes to the field at 20:00 CET on Sunday it will be the first time ever Torres has featured in an ElClasico.

¡Check out the ‘ElClasico' Content Hub to get up to date with all the latest news, line-ups, kick-off times, prize draws and the minute-by-minutes of the game featuring the stars of LaLiga Santander!