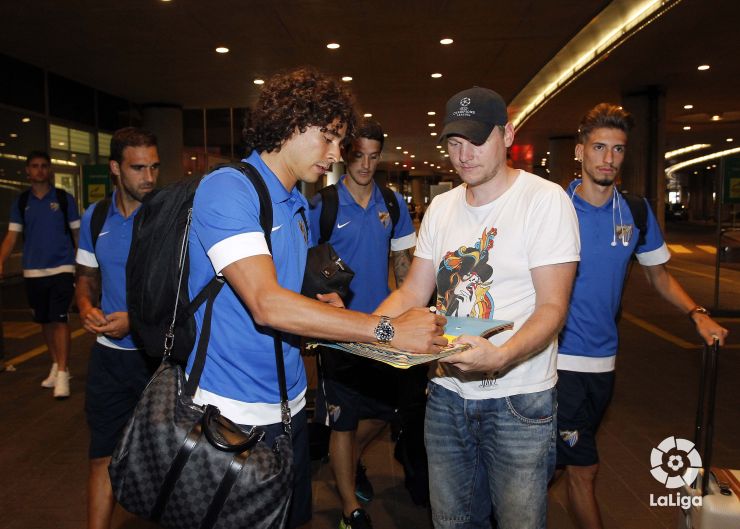 The Andalusian side will represent the Liga de Fútbol Profesional in Gelsenkirchen, one of the regions with the richest footballing history in Europe, where they will take on West Ham United FC and Newcastle United FC.

A week after the end of their LFP World Challenge Tour of Australia, Málaga CF has reached its final destination in the great global event. This time, the Andalusian side will be promoting the image of Spanish football and the values of the Liga de Fútbol Profesional in the home of the new world champions, Germany.

The squad landed in Düsseldorf international airport at 22:30 on Friday, and they spoke of their excitement about the adventures that await them in FC Schalke 04's emblematic and innovative stadium, the Veltins Arena in Gelsenkirchen: "Playing in a place like that and bringing the team and the Spanish league to a country like Germany is a unique opportunity. Also, for me, it is always special to return to where i played for so many years", said Roque Santa Cruz

Málaga CF will take on Newcastle United FC on Saturday 2 August at 15:30, and on Sunday 3 August at the same time, they play West Ham United FC. The whole city is excited about the arrival of the Spanish team and even Schalke 04's manager Jenks Keller welcomed the club: "Málaga CF have a great team. I'm sure we'll see a great match the people will have fun".

40,000 tickets have already been sold for this important stop the LFP World Challenge Tour is making in Germany and two intense days of football during which the image of the Spanish league will be in the spotlight.

The Liga de Fútbol Profesional will feature prominently, as, in addition to the participation of Málaga CF, LFP ambassador Fernando Sanz, will also be present.