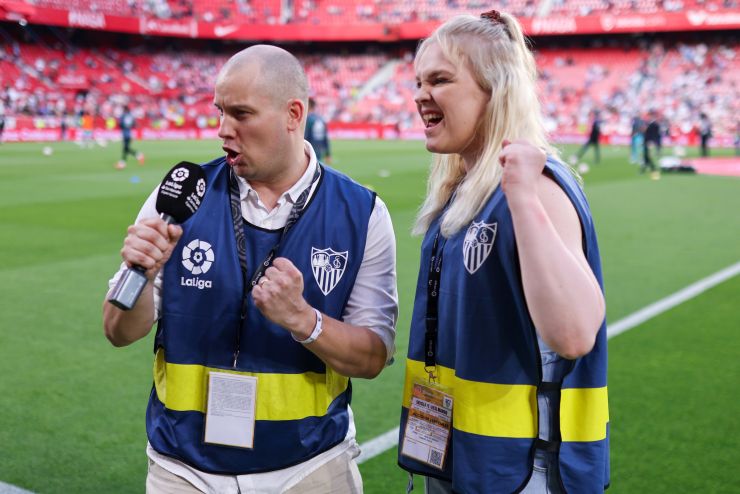 LaLiga Experience guests were treated to a thrilling encounter between Sevilla and Real Madrid, which ended with the visitors picking up all three points.

A festive atmosphere, fantastic football and a rollercoaster of emotions were just some of the delights in store for LaLiga Experience guests representing DAZN (Italy) and C-More (Finland) at the Ramon Sanchez-Pizjuan stadium.

The lucky participants, Mikko Vehvilainen and Borja Valero, enjoyed the lead-up to Sunday’s big match in style. Before kick-off, they were given the chance to see both teams warming up, as well as a comprehensive tour of the stadium, which included the press area, dressing rooms, and dugouts from where, a few hours later, stars of both teams would be sitting and watching the game.

But, that wasn’t all that LaLiga Experience had to offer. Vehvilainen and Valero not only got to meet Jorge Paradela, Sevilla’s Business Director, but Valero’s DAZN Italia were also given the chance to interview Monchi, the Andalusian club's legendary sporting director, on the pitch half an hour before the kick-off.

However, the most spine-tingling moment for the guests was undoubtedly hearing Sevilla’s anthem belted out a cappella by the thousands of fans who had packed into the stands at the Sanchez-Pizjuan. The anthem and the passion shown by the supporters was an indicator of what was to come: an unrelenting torrent of football played out between Sevilla and Real Madrid.

The hosts took the lead through a classy free kick by Ivan Rakitic and a fantastic strike by Erik Lamela, who had been interviewed by both C-More and DAZN in the lead-up to the match. In the second half, Real Madrid kicked into gear and mounted a glorious comeback through Rodrygo, Nacho and Karim Benzema. It was an exhilarating game which provided a tremendous amount of entertainment for the watching crowds.

The VIP guests were given a unique insight into the emotions and the passion of the Spanish game, finding out for themselves what it’s like to take in a live LaLiga match in the company of Spanish fans. It was the icing on the cake of four unforgettable days in Seville, courtesy of #LaLigaExperience