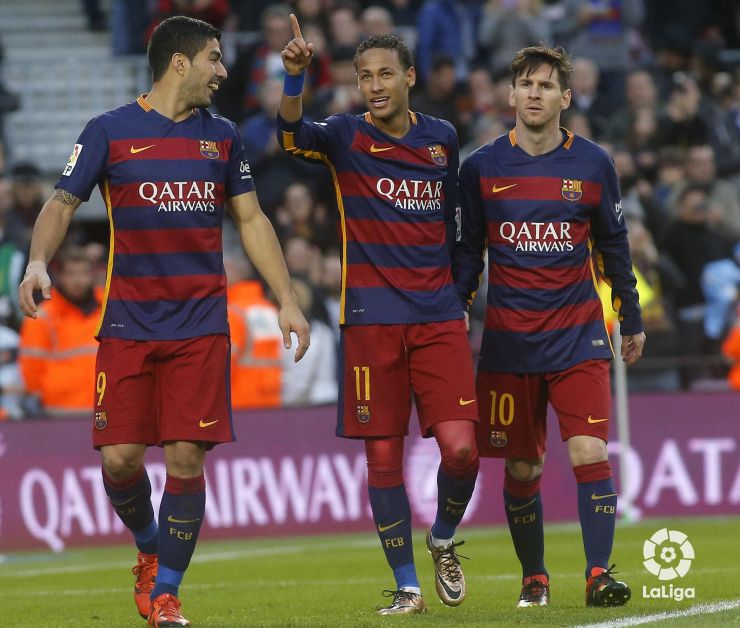 Neymar, Suarez and Messi destabilise the balance once again

The three FC Barcelona forwards took control of the game and didn’t give Real Sociedad a chance, who didn’t give the ball up at the Camp Nou.

The four goals by FC Barcelona against R. Sociedad gave them three precious points, which makes them grow stronger at the top of the league, with 33 points in the first 13 fixtures. The 4-0 leaves the Basques in a dangerous position while they wait to see what their direct rivals can do. Let’s go through the key points of the match.

FC Barcelona’s forwards destabilised the balance again. The Catalan team opened the score in the 22nd minute thanks to Neymar’s magic and a great pass by Dani Alves. Furthermore, in the 53rd minute, the Brazilian did it again to sentence the game. With these two goals he has now scored 14 in 13 matches.

Real Sociedad didn’t give up on the ball

Despite the result, the away side took the challenge of not losing possession and they moved the ball every time they could.  The team has only needed two match days for Eusebio Sacristan’s influence to make a difference in their game and Camp Nou was the perfect stage to show it.

Suarez’s hunger for goal does not cease

Six consecutive games scoring in the Liga BBVA is what the Uruguayan has achieved so far, who has become the most decisive player for FC Barcelona and Neymar’s and Messi’s perfect partner. This time, Suarez extended their lead with a volley, again from a cross by Dani Alves.

With today's 4 goals the trio of #Messi, @LuisSuarez9 and @neymarjr have now scored 43 goals this season #FCBlive pic.twitter.com/ss1lzR9Abn

It was a celebration day for Gerard Pique. The Catalan defender has reached 200 games wearing FC Barcelona’s shirt in the Liga BBVA and he did it with all his family on the pitch. In addition, he was able to celebrate it with a victory that keeps his team at the top of the table.

Solidarity had its reward

Only Messi was left to score and in the end he succeeded in doing so. His team mates gave him the ball so many times, that the Argentinian ended up scoring the 4-0 despite Geronimo Rulli’s saves.