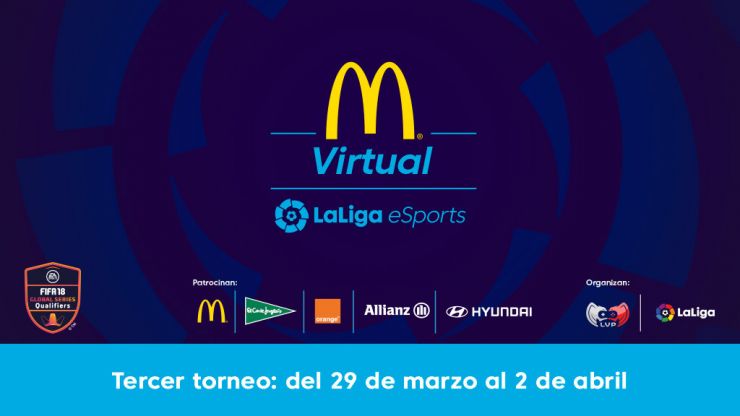 Find out what went on in the third qualifying stage of the competition which will crown Spain's top EA Sports FIFA players on PlayStation 4 and Xbox One.

The contestants in the McDonald's Virtual LaLiga eSports tournament were back in action and we are just a step away from finding out the names of the 16 PlayStation 4 and Xbox One players who will make it through to the final phase, to be played in person at the Liga de Videojuegos Profesional venue in Barcelona.

Following the thrilling previous two rounds of the online phase, the third qualifying stage did not disappoint. Between 29 March and 1 April more than 3,000 users sought to crown themselves champions and take a giant stride towards the final phase on each platform. Once again the LaLiga Santander and LaLiga 1|2|3 eSports clubs were well represented.

On the PlayStation 4, the six opening best-of-three knockout rounds were played on ArenaGG, before the customary last 16, quarter-final and semi-final rounds. Users JraLion10 and AndoniiPM secured the two spots in the final, with AndoniiPM claiming victory with a 2-0 aggregate score.

On the XBOX One, with three opening rounds, users vivi Khofolo and gravesen_1 battled it out for glory in the final. It was vivi Khofolo who came out on top in this third tournament, dispatching the runner-up in the second qualifying stage 2-0. Also worthy of a mention was the fine contest in the quarter-final between two UD Las Palmas players, DevilKane and raulflores, with the latter taking a 2-0 victory.

The fourth and final tournament in the online phase kicks off on 3 April and runs until 7 April. Each qualification stage sees points awarded to the 64 best players based on their final position in the tournament.

The winner on each platform in the final phase will be rewarded with a place in the EA Sports FIFA 18 Global Series, which will determine the sole Spanish representative to attend the FIFA eWorld Cup and battle it out to become known as the best FIFA player in the world.