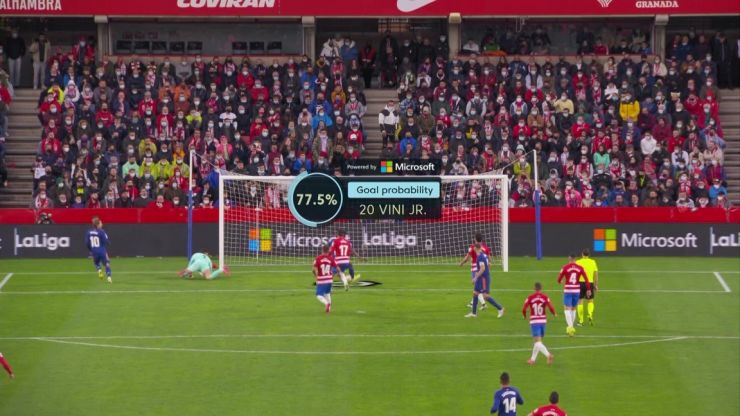 LaLiga takes pioneering step by adding advanced near real-time goal probability graphics to its broadcasts, thanks to Microsoft technology

A multidisciplinary team led by data scientists at LaLiga Tech has managed to derive this stat in 30 seconds, allowing such graphics to be included in goal replays for the first time ever.

In Matchday 22, starting today, LaLiga will become a pioneer among European leagues by enhancing the goal replays of its national and international broadcasts with an advanced model of Goal Probability coming to LaLiga Santander. This stat is obtained in 30 seconds at the frame level, almost in real time, thanks to the technological capacity provided by Microsoft Azure’s artificial intelligence and machine learning, as part of the collaborative Beyond Stats project. This initiative is part of the ongoing alliance between LaLiga and Microsoft, and has the objective of bringing the performance metrics used by football clubs closer to the fans. Under the agreement between the two organisations, reinforced in May 2021, different projects are being developed with the aim of digitally transforming the sports and entertainment industry.

A multidisciplinary team, led by the Business Intelligence experts at LaLiga Tech, has succeeded in making this calculation in 30 seconds, meaning the stat can be incorporated into the broadcast as a graphic almost immediately, something that, until now, hadn’t been possible in the audiovisual setting given the complexity of this specific data point.

Thanks to this achievement, LaLiga will become a pioneer among European leagues by communicating this metric during goal replays, specifically the second replays, via graphics made possible thanks to Microsoft technology. With this, fans watching on will be able to see and understand first hand just how good a goalscoring chance actually was. This information can bring fans even closer to the action and help answer questions such as “What was the likelihood of that goal being conceded or scored?”, thereby helping to explain how efficient the players are in their finishing. With more stats available to the viewers, they can better evaluate the performances of the teams and players and uncover attacking or defensive tendencies, while this can even contribute to an analysis of the season-long performance of a team or player, thanks to the soundness of this new statistical model.

The new metric has been built based on an in-house model from the football analysts at LaLiga’s Mediacoach, who worked along with the Business Intelligence & Analytics team of LaLiga Tech, the technological subsidiary of the organisation. The Mediacoach platform is capable of capturing almost 3.5 million positioning data points per match, which translates into some 2,000 metrics per player and which helps to create particularly reliable stats.

The main innovation, which sets this stat apart from those offered by other platforms, is the incorporation via graphics of the metric at the frame level and during a live match, which also take into account the goalscoring efficiency of the player involved in the piece of play. It is possible to incorporate, almost in real time, the player’s historic stats into the broadcast during the second replays of a goal, which is ground-breaking and only made possible now thanks to the capacity of Microsoft Azure.

As LaLiga's global Tech and Innovation Partner, Microsoft is helping to develop new solutions and boost existing ones with the goal of digitally transforming the sports and entertainment industry. Among the projects on which the two organisations are working are next-generation over-the-top (OTT) streaming services, advanced content protection services and venue management systems. In addition, as part of the organisation's agreement with Microsoft, which was reinforced in May 2021, work is underway on up to 21 new metrics and other developments that will be announced throughout 2022.

Discussing this pioneering project, LaLiga Tech general director Miguel Ángel Leal said: “Thanks to the strength of Microsoft Azure, we are managing to improve the experience for our fans by incorporating this model that calculates the probability of a goal being scored. The algorithms we’ve developed are based on artificial intelligence and require a very high computing power in order to work through a very large number of data points and offer these stats almost in real time. Fans increasingly want a more personalised experience and quality information that helps them to interpret and enjoy the game, something we are working on through the Beyond Stats project, both on the website and with the ‘Powered by Microsoft’ graphics shown in broadcasts. The work being carried out by our team of data scientists at LaLiga Tech, as part of our alliance with Microsoft, makes it possible to present innovations that are pioneering in the industry, such as this sophisticated Goal Probability model.”

Rebeca Marciel, the enterprise commercial lead at Microsoft Spain, added: “Microsoft’s Machine Learning & Artificial Intelligence technology has facilitated this development, thanks to the analysis of historical tracking data of more than 20,000 shots obtained from some 2,000 matches. The capacity of this technology has allowed LaLiga to take another step forward, becoming the first league to bring a metric with these characteristics into its broadcasts.”

Should that goal have been scored? The secret of the metric.

LaLiga and Microsoft’s Goal Probability stat analyses well-defined parameters through a mathematical model that determines how each of these variables affects the likelihood of a goal being scored or not scored. During a match, real-time data on the positioning of the players is received thanks to the 16 optical tracking cameras that are installed in each stadium of the league and, from there, each parameter is calculated and the model runs the numbers to obtain the Goal Probability.

The perfected metric is based on a variety of different variables, such as the player’s line of sight, which considers the positions of the opposition players in the way of the player’s view to goal, which has a decisive impact on the difficulty and, in turn, the probability of finishing the chance. Other factors taken into consideration include the distance between the ball and the goalkeeper and between the ball and the goal, or the distance and angle to the nearest defender. This produces a final stat that is shown on the screen. The lower the probability figure for scoring a goal that has, in fact, gone in, the more efficient the shot must have been in relation to what should have been expected of the player.

The model returns probabilities between 0% and 100%, providing the viewer with an insight into the golden opportunities that were wasted, or the goals that were scored from a nearly impossible position. In the case of LaLiga, the figure shown will also take into consideration the goalscoring efficiency of the player in question. With older Goal Probability models, a 2% probability would mean only one of every 50 attempts should end up as a goal. Yet, with the LaLiga model, which also considers the numbers of the particular player involved, this ratio will be larger for those with greater technical quality and, therefore, will be more precise.

This is made possible thanks to a player efficiency indicator that is calculated based on variables such as the ratio of goals per match and per shot by the player involved. For example, Karim Benzema would appear at the top level of goalscoring efficiency with this indicator and one of the test results of the metric showed that an objective Goal Probability stat of 14.1% without this “player effect” reached 23.1% when Benzema was the player taking the shot. 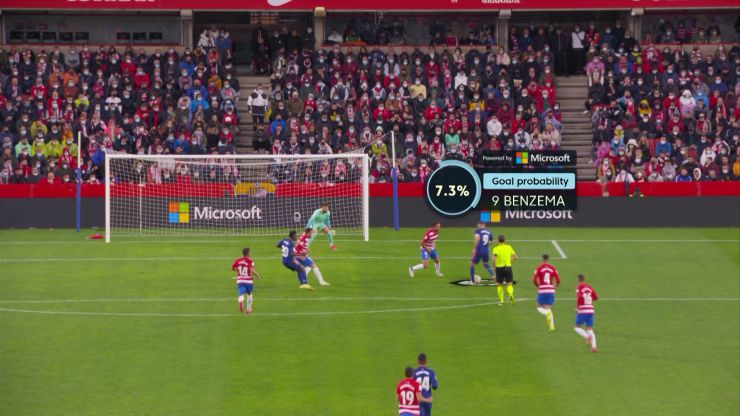