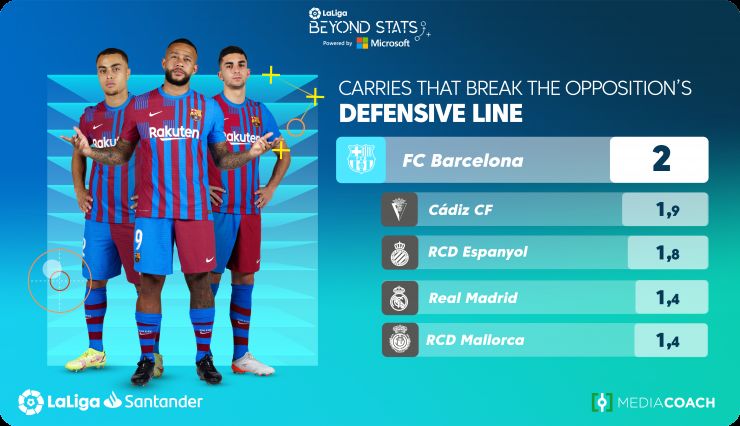 Today in LaLiga Beyond Stats we’re going to focus on carries. Our analysis will explore carries by team and player.

When it comes to playing styles, one of the hallmarks of the sides in our league, LaLiga Santander, is the quality of the team and possession play. These blueprints can take many forms and seek to create as many goalscoring opportunities as possible. A possession-based playing style, which ultimately aims to result in goals, is all about creating as many overloads as possible as each team aims to unsettle the opposition’s set-up by circulating the ball in a bid to discover the most advantageous situations for each team. As mentioned at the top of this piece, passes and team play are key, but today we’re going to focus in another major element: carries.

These individual actions offer entertainment and represent a very powerful tool to break opposition lines and overcome players. Thanks to the quantity and quality of the data we obtain through the Mediacoach and Microsoft technology, we’re not only able to discuss carries, but can divide them up into: carries that break the opposition’s midfield line, carries that break the opposition’s defensive line and carries leading to shots. Our analysis will explore carries by team and player.

These initial carries determine the direction that a move will take and the subsequent overloads and spaces that will be created. In terms of teams, Real Madrid are top of the pile for the number of such carries, followed by RC Celta.

In the individual stakes, it is of particular note that two Celta players occupy positions amongst the top 5. A closer look at the figures recorded by each of the Galician outfit’s players indicates that the team seek to break the opposition’s midfield line as a major feature of their play. Nestor Araujo, Javi Galan and Johan Mojica are three of the five players to have posted the highest number of such carries.

If we explore the standings in terms of individual players, we note that no Barcelona player makes the cut, despite the Catalan giants ranking top of the class in this department. This owes to the fact that such actions are well shared out amongst the Barcelona players. The top five features Adria Pedrosa, Ivan Alejo, Luis Rioja and Vinicius Jr, whilst there’s another appearance for Johan Mojica. Given that we’re dealing with the opposition’s last line of defence, these carries typically take place in wide areas, which explains why our list is made up of flankers.

We round our analysis off with the type of carries that produce the most edge-of-your-seat moments. These carries are typically followed by one or two passes and a subsequent attempt on goal. In this instance, it is not a case of measuring the carry on the basis of the lines it breaks, but in terms of its productivity. In the team stakes, Real Madrid, Real Betis and Villarreal CF take their places on the podium.

The top 5 in the player rankings features the undisputed king of carries that lead to shots: Vini Jr.. His tally is double that of his nearest pursuer, Nabil Fekir. Meanwhile, Luis Rioja and Ousmane Dembele are level in third and fourth spot and Iago Aspas closes out the standings in fifth. Of all of the rankings, this is the one that bears the closest resemblance to our impressions, i.e. it features players who were considered to pose a constant threat during games.

This brings our analysis of carries and LaLiga Santander’s top ball carriers to an end, but we wonder whether there’s a player you would’ve expected to feature in these rankings, but who hasn’t made the cut.

Visit LaLiga Beyond Stats and go deeper into the game with Microsoft and LaLiga!