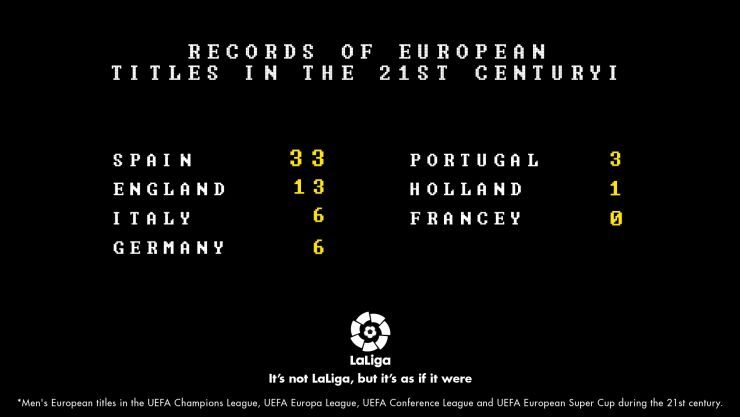 LaLiga Santander clubs have now won 33 UEFA titles in the 21st century, as many as every other league combined

Real Madrid’s Champions League final victory over Liverpool means LaLiga Santander teams have won each of their past 17 finals against non-Spanish opponents.

Vinícius’ goal and Thibaut Courtois’ saves earned Real Madrid a 1-0 victory over Liverpool in the 2022 Champions League final, with Los Blancos bringing the European Cup back to Spanish soil once again. This was the 14th time that Real Madrid won UEFA’s leading club competition, which is twice as many as the seven triumphs of the second-most successful club, AC Milan.

Real Madrid’s victory in Paris was also the 17th time in a row that a club from LaLiga Santander has defeated a non-Spanish opponent in a Champions League or Europa League or UEFA Cup final. In other words, the only occasions since 2001 where a Spanish team has lost a final in either of UEFA’s top two club competitions has been when they faced a domestic rival.

Overall, LaLiga Santander sides have won 33 major UEFA trophies in the 21st century, which is the same total as every other league combined. Of the 22 Champions League finals played this century, there have been 10 Spanish successes, while 11 of the past 22 Europa League or UEFA Cup finals were also won by teams from Spain. This has meant that 15 of the 21 UEFA Super Cups held this century have featured at least one Spanish side, with 12 victories.

In 2022, there could be another Spanish UEFA Super Cup winner, as Real Madrid will now take on Eintracht Frankfurt in Helsinki. That will be the 67th major UEFA trophy up for grabs in the 21st century, after 21 previous editions of the UEFA Super Cup, 22 completed Champions League campaigns, 22 Europa League or UEFA Cup finals and one edition of the Europa Conference League.

Of these previous 66 major UEFA titles, LaLiga Santander clubs have won exactly half of them, while the next closest league is the Premier League with 20 fewer European trophies in this time, as English sides have claimed 13 this century. Then, six were won by Italian clubs, six by German clubs, three by Portuguese clubs, three by Russian clubs, one by Ukrainian clubs and one by Dutch clubs.

The 33 Spanish triumphs on the continent have been achieved by six different institutions. Real Madrid have the most with 10, followed by FC Barcelona with seven, Sevilla FC with seven, Atlético de Madrid with six, Valencia CF with two and Villarreal CF with one. Three other Spanish clubs have reached UEFA finals in this time too, namely Deportivo Alavés, RCD Espanyol and Athletic Club.

This century of UEFA competition truly has been dominated by Spanish football, with the most important European trophy once again taking pride of place in Madrid. Thoughts now turn to Los Blancos’ UEFA Super Cup date in August, with a Spanish club once again present in that curtain-raiser for the European football season.