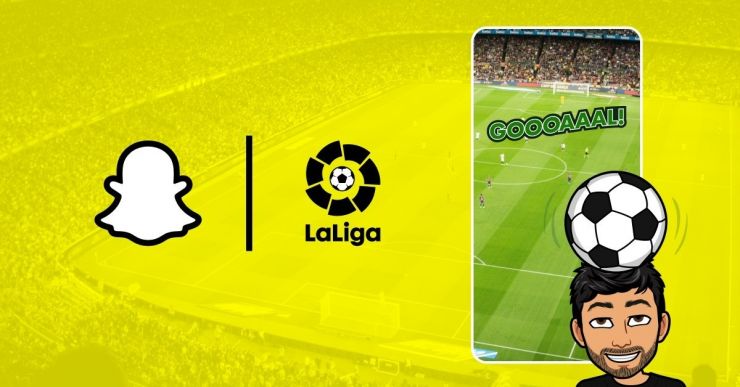 Through a Discover Show, a Snap Star account and numerous creative tools including Augmented Reality experiences, Snapchatters will be able to enjoy the best of LaLiga’s content, such as weekly highlights or top goals.

LaLiga, one of the major football leagues that is responsible for organizing professional football competitions in Spain, and Snapchat, an app that empowers people to express themselves, live in the moment, learn about the world, and have fun together, today announced a partnership to bring the best of football to millions of young fans on Snapchat.

Through the partnership, LaLiga will bring the most premium content from Spanish football to Snapchat’s global community of over 347 million people, who talk about and watch sports and football on Snapchat everyday. Snapchatters around the world will be able to enjoy weekly football highlights, historic archives, behind the scenes, top goals and saves of the year, through a dedicated Discover Show called LaLiga Show Time, as well as on Stories and Spotlight posted by @LaLiga Snap Star account. The partnership also includes the creation of Augmented Reality Lens experiences, Cameos, Bitmojis, Filters and Stickers.

This alliance reinforces LaLiga’s commitment to reach new audiences by capitalizing on innovative digital technologies, and Snapchat’s strategy for expansion and growth across the globe.

"This agreement is a step forward for LaLiga in its strategy of digitalization and reaching young audiences, as well as a reinforcement of our work on social media. Among the major European leagues, we are leaders with the most followers on social media, as we currently have more than 164 million, a record figure. The Snap ecosystem tools also allow us to offer quality LaLiga content to younger fans”, says Alfredo Bermejo, Digital Strategy director of LaLiga.

Football is the most popular sport in the world, with approximately five billion fans around the world according to a FIFA estimate, and LaLiga is one of the most popular competitions, with broadcasters all over the world. While the popularity of the sport continues to soar, new technologies like Augmented Reality, made-for-mobile content formats and digital platforms are transforming the football experience for the fans. With its highly engaged community, its AR technology, its Discover platform and the numerous footballers being Snap Stars, Snapchat is transforming the way football fans are experiencing and celebrating the Sport.

Alejandro Arenas, International Sports Partnerships, Snap Inc. said “We are so thrilled to partner with LaLiga, one of the world's most important sports leagues, and to be able to offer premium football content to Snapchatters across the globe. This is Snap’s very first partnership with a major European league and the beginning of a new way for football fans to experience their sport, whether that’s watching match highlights, playing with and sharing immersive AR experiences, or kitting out their bitmoji in their favorite teams kit.”