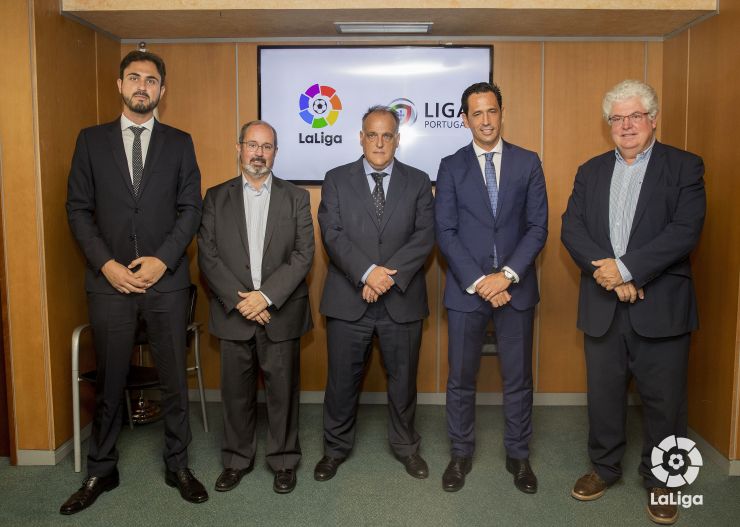 The institutions have signed a collaboration agreement covering areas such as financial control, brand promotion, social responsibility and training.

This Wednesday saw LaLiga and Liga Portugal rubber-stamp their excellent relationship with the signing of a Memorandum of Understanding (MoU), which will see the two organisations work hand in hand to develop the game in both Spain and Portugal. This agreement serves to establish the channels of communication to enable the two institutions to share information on finances, institutional issues and training.

One of the key features of the partnership concerns the assistance that LaLiga representatives are set to offer their Portuguese counterparts in an effort to see the league establish a financial control programme, the aim of which is to guarantee financial transparency across the Portuguese game and in the running of its clubs. This is an initiative that has been overseen by LaLiga since Javier Tebas's inception as president in 2013. As a part of this endeavour, Spanish and Portuguese clubs will be offered the opportunity to hold workshops in which to share best practices as they face up to the new challenges within the industry.

Another important aspect covered by the MoU signed by Tebas and his Portuguese counterpart, Pedro Proença, relates to the institutions' plans to join forces and promote both brands and their internationalisation, with a view to fostering their development and growth. In addition, the agreement also caters for the organisation of conferences and knowledge sharing by experts from across the following fields: sports management, marketing, financial management, administration, stadium security, integrity, match-fixing and brand internationalisation.

Furthermore, the two organisations are poised to team up and work on issues relating to professional refereeing, in an effort to keep themselves up to date with the changes across the professional game. Another of the standout features of this partnership is the commitment of both institutions to promote fair play and lead the battle against match-fixing. The two bodies firmly condemn all forms of match manipulation, which serve only to devalue sport, and will work together to eradicate such practices by developing joint policies focused on integrity-related aspects of the game.

On an institutional level, LaLiga is set to advise the Portuguese league about the creation of a foundation and the development of social outreach projects by drawing up a corporate social responsibility policy. Meanwhile, members of LaLiga staff will also give their Portuguese colleagues the lowdown on the institution's Ambassadors programme, which was launched in 2015.

Liga Portugal also expressed an interest in the efforts of Spanish football's governing body to promote youth football, with the LaLiga Promises tournament attracting much attention. Indeed, this link-up also features the opportunity for Portuguese involvement in the prestigious annual LaLiga-organised youth competition. In addition, the agreement includes the possibility of opening LaLiga Excellence Academies in Portugal and the staging of children's summer sports camps.

Founded in 1984, LaLiga (Liga de Futbol Profesional) is a sports association comprising the 42 teams that make up the first and second divisions of professional football in Spain. LaLiga, based in Madrid, is responsible for the LaLiga Santander and LaLiga 1|2|3 leagues and the television production, which in the 2016/2017 season reached more than 2.5 billion people globally. The association also has an active foundation and is the world’s only professional football league with a league for intellectually challenged footballers: LaLiga Genuine.

About the Liga Portugal

Founded in 1978 and headquartered in Porto, Liga Portugal (Portuguese Professional Football League – LPFP) has organised the nation's professional football competitions since the start of the 1994/1995 season. The Liga NOS (I Liga) and LEDMAN LigaPro (II Liga) are the two main domestic leagues governed by Liga Portugal, which is also responsible for the organisation of the Taça CTT (League Cup). Between the two national leagues, the institution represents 33 sports companies and 38 clubs. The organisation's mission is to guarantee excellence in the organisation of professional competitions, whilst generating commercial revenue as a part of this endeavour. The institution is governed by the values of hard work, talent, professionalism and inclusiveness.