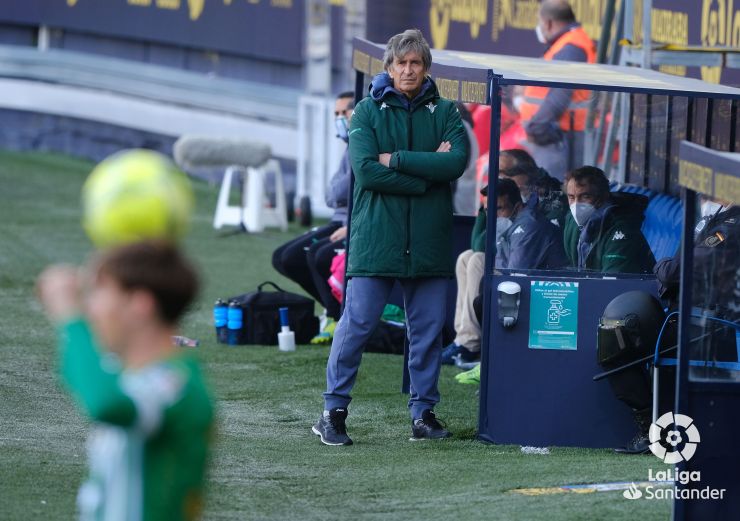 The keys to Manuel Pellegrini’s success

Real Betis are enjoying a practically pitch perfect start to 2021. Here we take a closer look at the reasons behind coach Manuel Pellegrini and his team’s triumphs, in light of their win over Cadiz CF in LaLiga Santander Matchday 25 of LaLiga Santander.

Manuel Pellegrini took charge of Real Betis this summer, with the mandate of qualifying for Europe at the end of the 2020/21 season. As it stands he will fulfil what he set out to achieve, with the Andalusians currently sitting pretty in sixth place in the league.

Betis have won six of their last eight games in LaLiga Santander and have claimed 19 points out of a possible 24. Not only that, they have fallen only once to defeat, against FC Barcelona, with the Catalans scraping a 3-2 victory in the 87th minute in what was a closely fought match.

The Chilean coach seems to have found the formula to success and has a firmly established starting eleven, only making changes when injuries force his hand. Emerson Royal, Guido Rodriguez and Nabil Fekir are the squad members who have played the most minutes this season.

Tactically speaking, Pellegrini has crafted a team in his own image. While it’s true to say that his players initially found taking on board and implementing his defensive strategies quite a challenge, it seems that these teething problems have gone away since the start of the year. In the last nine outings, the Verdiblancos have only conceded eight goals, an average of 0.88 per game, whereas before Matchday 17 this figure was 1.87.

The stats don’t lie. The Chilean usually starts with a 1-4-2-3-1 formation. The highlight of the team tactically speaking is its defensive character. From a positional standpoint, it is worth highlighting the seamless coordination of the defensive line as they stop in the area before a positional attack from the rival side. This is one of the reasons why Real Betis is, according to ‘Mediacoach’ data, the LaLiga Santander team that forces the second highest number of off sides from rivals; an average of 3.76 per game, behind SD Eibar. This speaks highly of the stellar defensive work exercised in Pellegrini’s team.

The 67-year-old has also worked a lot on pressuring the opponent and turning over possession. In this facet of the game, Real Betis are fourth in LaLiga Santander in terms of the rate at which they win the ball back. For example, over the course of a game Betis on average turn over possession 3.4 times every minute. What’s more, they boast the second-best rate of quick possession turnovers – within five seconds of having lost the ball - in LaLiga Santander, indeed clear proof of how effective Pellegrini’s side are at hounding their opponents and winning the ball back.

Betis’ greatest defensive strength, however, is withstanding whatever the opposition throws at them. When it comes to the percentage of times their opponent makes an attempt on goal, Real Betis have the fourth-lowest statistic in the division, at 85.9%, clear proof that they are very skilled at keeping their opponents at arm’s length over 90 minutes.

If we take into account only the last eight matchdays, the Andalusians rank fourth in the league for the number of attempts that the opposition makes at their goal before scoring, while their goalkeepers boast the third highest average percentage of saves. The aforementioned statistics speak for themselves and show that the team has markedly improved. Before matchday 17, their opponents needed an average of five shots to score a goal, while over the last eight matchdays this figure has risen to 11.

In addition to their high-intensity and attack-nullifying pressing while defending, Pellegrini has also honed Betis’s prowess in the final third. He has moulded them into a comfortable and decisive outfit in attack, which make on average 2.4 times more attempts on goal than their opponent.

They have recorded the fourth-highest number of attempts on goal in LaLiga Santander, as well as having the sixth-highest percentage of possession in the league, showcasing more and more control in the final third. Yet the possession isn’t for possession’s sake - Real Betis break through their opponents more than most teams in the division, being fourth in terms of dribbles per game and third at successful attempted dribbles. This is statistical proof of how at ease Betis are with the ball and how effective they are when on the offensive.

This is the essence of Manuel Pellegrini, one of the most experienced coaches in LaLiga Santander and who is gunning for European qualification. He’s a man who knows the game inside-out and has transformed Betis into a well-oiled machine and one that is well on track to achieve their season objectives.