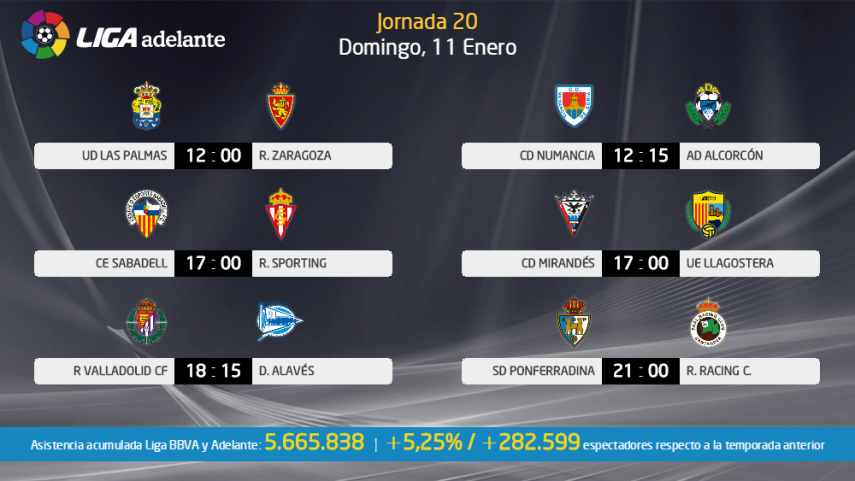 The Liga Adelante leaders will host an old boy when Real Zaragoza’s coach comes to town. The home side have a full set of players to choose from, including new signing Jonathan Viera, who could get some minutes on his return to the Island.

Numancia and Alcorcón looking to win after three without victory

Zaragoza’s main worry is to recover their defensive solidity as Mario Carlos Diogo continue to recover from injury.

Sorianos and Madrileños are looking to end their runs of three games without a win. The home side have drawn their last three, while José Bordalás’s side have lost one and drawn two.

Isidoro is out for Juan Antonio Anquela’s outfit, while Mikel, Guichón and Rubén Sanz are suspended for the visitors.

A Mirandés side looking to get into the playoffs will take on a Llagostera side who have won two of their last six ties.

David Querol, for the Catalan side, will miss out through suspension. Carlos Terrazas, the home side’s manager, said that his side must be "very aware" because "it will be a tough game".

The Catalan side in need will try their luck against the consistent Asturian side. The home side, who got back to winning ways last time out, will be looking to end the run of the only undefeated side remaining in Liga BBVA and Liga Adelante.

Benja, a new recruit at the Nova Creu, is in the squad, while Martí Crespí misses out through injury. Álex Menédez, Álex Barrera and Rachid have been omitted by visiting manager Abelardo, who also said that his side should take pride in maintaining their record.

Two sides in contrasting form face off at the José Zorrilla. The home side, who are looking for direct promotion, host an Alavés side at the wrong end of the table.

Portuguese André Leão, through suspension, is the only absentee for the home side, while the Basque outfit have a full compliment of players. Their defender, Xabi Castillo, said that his side must "get back their defensive shape".

Playoffs and relegation are on the cards at El Toralín in the 20th matchday of Liga Adelante. Ponferradina, who are without Lucas Domínguez, are looking for a win that would help them in the fight for promotion.

Racing, who are without a win since 22 November, need the three points to help escape the danger zone. Their boss Francisco Fernández said that his side need to show intensity, discipline and sacrifice to get the results they require.