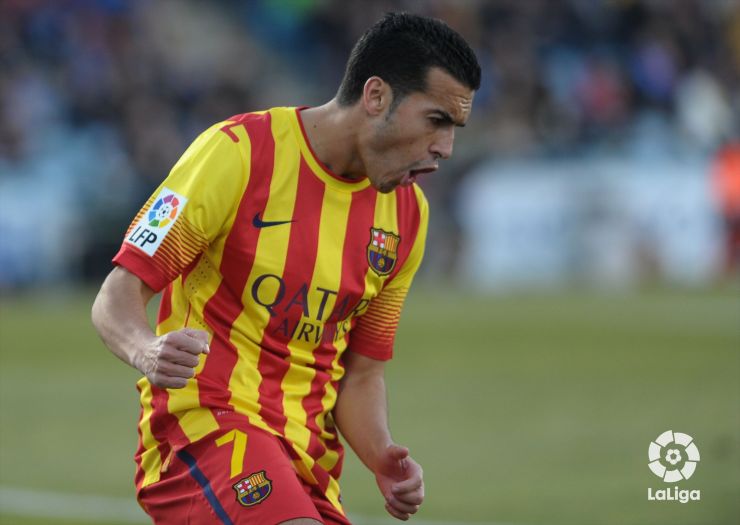 A goal-filled Sunday in the Liga BBVA

23 goals were scored in five matches on a day when Barcelona, Real Madrid and Athletic all had to dig deep to win. Espanyol defeated Valladolid, while Celta and Osasuna shared the points.

Matchday 17 of the Liga BBVA, the last of 2013, left behind an impressive 37 goals and more than half of them came on an excitement-packed Sunday.

Few could have imagined, when Getafe CF were winning 2-0 after 14 minutes, that FC Barcelona would end up with a comfortable victory in the Coliseum Alfonso Pérez. But with an outstanding Pedro Rodríguez, who scored a hat-trick, provided an assist and won a penalty, Gerardo Tata Martino's team upped their game and sealed a win that means they finish the year at the top of the table, level on points (46) with Club Atlético de Madrid.

In the Mestalla, Real Madrid CF also had to work hard to overcome a feisty Valencia CF, who had chances to seal the victory having come back from a goal down on two occasions. However, when it looked like the match would end in a draw, in the dying minutes, Jesé stepped up to make it 2-3 and keep Real Madrid five points behind the leaders. Cristiano Ronaldo, who scored the second goal for the Whites, has now found the net 18 times, putting him one behind the Liga BBVA's top goal-scorer, Atlético's Diego Costa.

Ernesto Valverde's men will enjoy their Christmas after beating Rayo Vallecano 2-1 in a match that was brimming with excitement and chances right until the final whistle. Athletic Club's three points take the team to fourth position, a UEFA Champions League spot, before they meet Real Sociedad de Fútbol in the Anoeta on the 5th of January. In addition, they are still unbeaten in the new San Mamés. Meanwhile, Rayo, despite playing some good football, are still in the danger zone.

In Sunday's early game, RCD Espanyol sealed an important Liga BBVA victory by beating Real Valladolid CF 4-2 and have now distanced themselves from the relegation zone. With an impressive Sergio García and a brace from Christian Stuani, Espanyol was 4-0 up against a Valladolid in which Javi Guerra scored his fourth goal in the last two matches.

Finally, RC Celta de Vigo and CA Osasuna shared the points in the Balaídos in a match that leaves both teams near the bottom of the Liga BBVA table. Osasuna, who took the lead, had their chances to seal the deal, but they ended up sharing the spoils and will spend Christmas in the relegation zone.