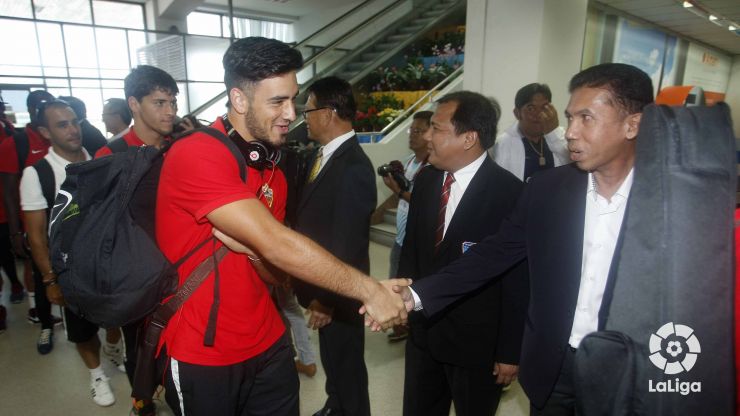 UD Almería are now in Phuket

The Andalusian outfit were greeted well at the airport, where the regional governor and president of Phuket FC awaited them

UD Almería are now in Phuket as they continue their LFP World Challenge tour, organised by the Liga de Fútbol Profesional. On Saturday the side travelled to the Thai province, where they will play their second game of the tour against Phuket FC on 6 August at 14:00 Spanish time.

The Andalusian side, in addition to the assembled media, were received at the airport by the regional governor, the president of Phuket FC and prestigious personalities from the region. After landing, the authorities presented the squad with a traditional necklace, as per Thai culture.

After the warm reception, UD Almería went to the Kata Beach Resort & Spa, where they will stay for the duration of their time in Phuket. The hotel management gave them a big welcome in front of the press, who are following the team during this LFP World Challenge tour in Thailand.

"The reception we’ve got is magnificent. The friendly nature of Thai people is incredible and you can’t ask for any more. On a footballing level we are struggling a bit to adapt to the climate. Even though Wednesday’s game is a friendly, we need to prepare and be ready for the first game of pre-season”, said Fernando Soriano upon arriving in Phuket.