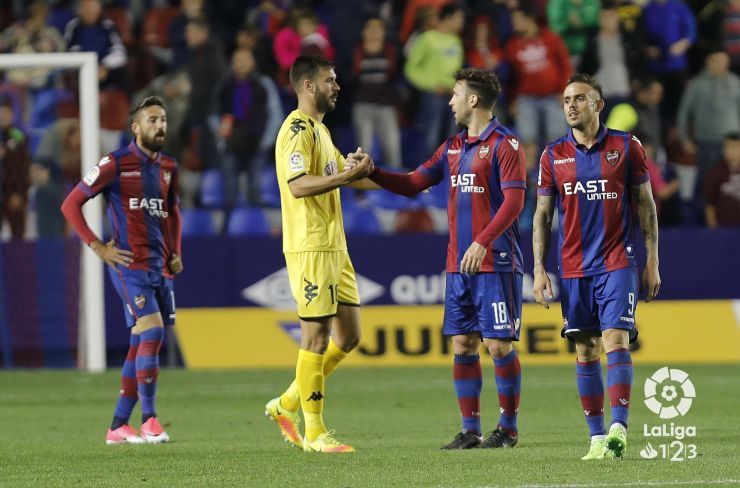 Levante drop points on a good weekend for Getafe and Rayo

With the playoff picture looking increasingly tight, the league leaders were held at home by Reus, a result which leaves promotion on hold.

Elche CF 1-3 CD Numancia
Numancia took a huge step towards securing their LaLiga 1|2|3 status for another season with a convincing win at the Martinez Valero. They moved into the driving seat with goals either side of half-time from Iñigo Ruiz de Galarreta, who finished with aplomb after seizing on a loose pass by goalie Juan Carlos, and Nacho, who drilled home on the follow-up after the hapless keeper had spilled a free-kick. Although Borja Valle pulled one back with 15 minutes left, Unai Medina's penalty made sure of the three points, thanks to which the visitors leapfrog fellow mid-table dwellers Elche in the table.

CD Tenerife 3-3 Girona FC
It was honours even at the end of this thrilling, topsy-turvy encounter between promotion chasers at the Heliodoro Rodriguez Lopez. Girona eased into a 2-0 lead through a Carlos Ruiz own goal and a Pedro Alcala header, but Tenerife turned things around through a Suso spot-kick, an Alberto Jimenez screamer – after Aaron Ñiguez, the brother of Atletico Madrid star Saul, had skied his side's second penalty – and a close-range Amath finish. However, Ruben Alcaraz was to have the last say, restoring parity with a fiercely struck free-kick on 80' and ensuring that the second-placed Catalans stay eight points ahead of the Canary Islanders, who remain well positioned in the playoff race.

Nastic 4-1 CD Mirandes
Another team who boosted their survival prospects this matchday were Nastic, who put some daylight between themselves and the drop zone by romping past Mirandes. Though the basement boys forged ahead early on through Alex Garcia, that was as good as it was going to get for them. After equalising through Xavi Molina before the break, the hosts stormed to a crucial victory courtesy of Sergio Tejera's low strike, Cristian Lobato's curling effort from outside the box and Achille Emana's coolly dispatched penalty.

SD Huesca 1-1 Cadiz CF
Alfredo Ortuño nodded home a corner deep into second-half stoppage time to steal a share of the spoils for Cadiz. Samu Saiz had handed Huesca the advantage 10 minutes after the interval, picking himself up following a wild challenge in the area and calmly dinking the ensuing penalty into the net. It looked for all the world like that would be enough for the points to stay at El Alcoraz, but Ortuño had other ideas. Despite the stalemate, both clubs remain firmly in contention for a playoff spot.

Sevilla Atletico 6-2 R. Valladolid CF
Those who descended on the Ramon Sanchez-Pizjuan on Sunday lunchtime were treated to a deluge of goals and some scintillating football, with Marc Gual starring as the Andalusians hit Paco Herrera's playoff hopefuls for six. The Badalona-born sharpshooter turned in a dazzling display in which he claimed a hat-trick and an assist. Diego Martinez's troops raced into a commanding 4-0 half-time lead, and despite a second-half brace from Raul de Tomas, the Sevillians ran out convincing winners. 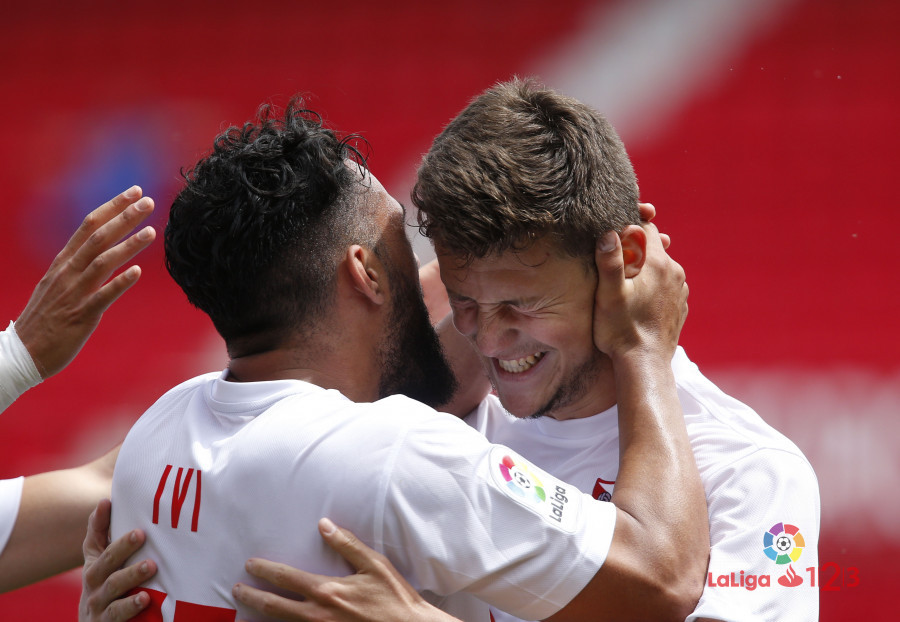 AD Alcorcon 0-3 Getafe CF
Los Azulones snared the local bragging rights as they swatted their southern Madrid rivals aside with consummate ease at Santo Domingo. The visitors found themselves two goals to the good after David Navarro and Carlos Carbonell both contrived to turn the ball into their own net in their efforts to deal with teasing crosses within a hapless four-minute spell at the end of the first half. In the 83rd minute, Jorge Molina wrapped up the points for Jose Bordalas's playoff pretenders when he produced some neat footwork inside the area, before finding the bottom corner from the angle.

UCAM Murcia CF 0-1 Rayo Vallecano
Rayo extended their unbeaten run to five games after edging UCAM in a keenly contested clash at La Condomina. Javi Guerra powered home a bullet header from Patrick Ebert's inswinging free-kick to hand the Madrilenians three precious points in their quest to stave off the spectre of relegation. This result moves the Vallecas outfit onto 40 points and hands them a four-point cushion on the drop zone. The Murcians, for their part, are perched perilously just two points above the final relegation spot, which is currently occupied by Almeria.

Cordoba CF 1-0 UD Almeria
The Nuevo Arcangel played host to yet another bottom-of-the-table clash on a matchday which served up its fair share of relegation six-pointers. Luis Carrion's charges came out on top in this one to give their survival chances a shot in the arm, with Sasa Markovic's 13th-minute tap-in proving to be enough to separate the sides in this all-Andalusian bout. This victory sees Cordoba reach the 40-point mark and gives them a four-point buffer on the drop zone.

CD Lugo 2-1 R. Oviedo
A Joselu Moreno brace saw Lugo stage a stirring comeback after Jose Verdu's unerring 7th-minute finish had left the Galicians with it all to do at the Estadio Angel Carro. This result moves Luis Cesar Sampedro's men up a spot into eighth and four points behind the Asturians, who drop down to sixth to occupy the final playoff berth.

Zaragoza took a massive step towards cementing their mid-table status after seeing off a plucky performance from Sergi Barjuan's relegation battlers. Angel Rodriguez proved to be the match-winner with his looping header from a Manu Lanzarote corner in the 36th minute sealing the deal for Cesar Lainez's charges. Victory for the Aragonese outfit leaves them nine points adrift of the playoffs and six points above the drop zone. Meanwhile, the islanders remain marooned in the relegation mire and six points shy of safety.

Levante UD 0-0 CF Reus
A goalless draw means promotion for the LaLiga 1l2l3 leaders will have to wait as Reus picked up an important point on the road. Neither side was able to break the deadlock in a tight game at the Ciutad de Valencia. 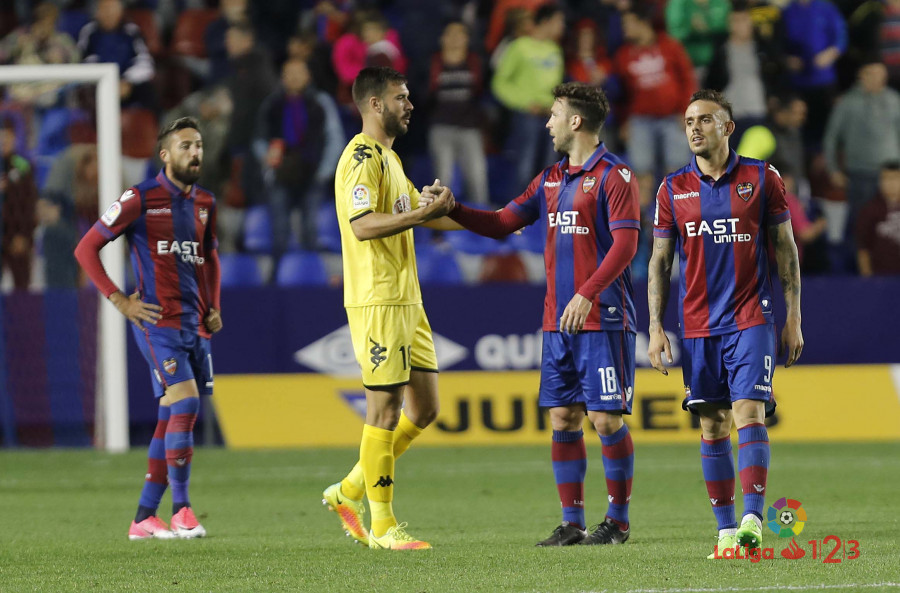