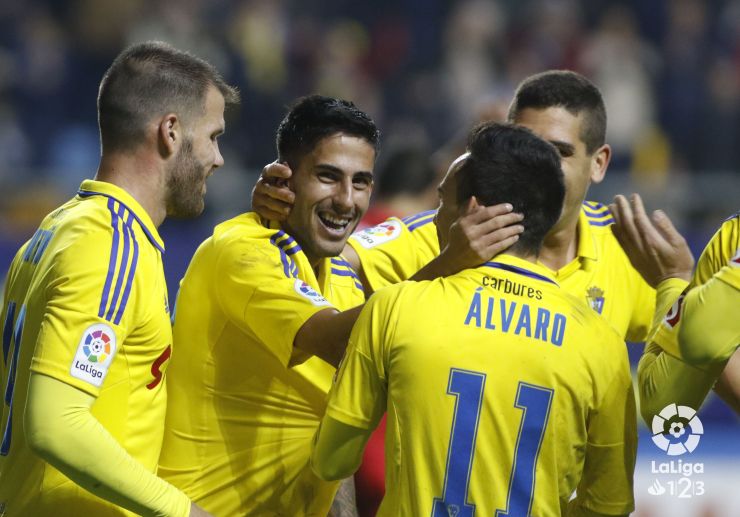 Jose Bordalas's charges made light work of Valladolid to end 2016 in third, whilst the Andalusians capped off a memorable year with a comprehensive victory over Sevilla At., which leaves them flying high in fourth.

Elche brought an end to their four-game spell without a win on the road by beating Reus 1-0 thanks to a goal by Guillermo right after the restart. The win puts the Valencian side close to the promotion playoff places, with Reus dropping down to eighth after their third home defeat of the season. 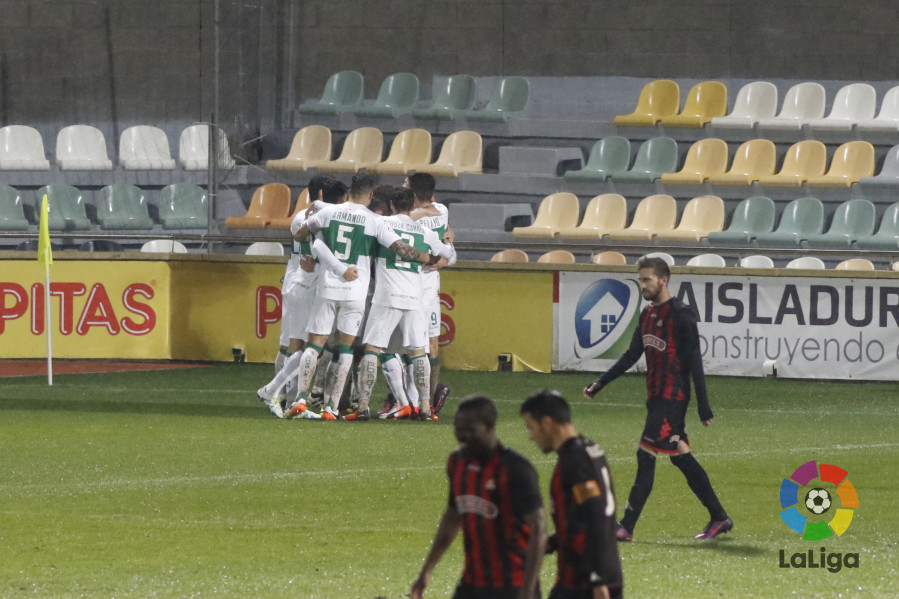 Getafe continued their hot streak, which began with the arrival of Jose Bordalas and keeps them in the fight for a direct promotion spot after beating Valladolid 3-1. Following a goalless first half, Paul Anton and Daniel Pacheco gave the home side the advantage. Although Juan Villar pulled one back for Valladolid, Jorge Molina's instantaneous reply made it 3-1 to Getafe – a final score which consolidates the Madrilenian outfit's position in the upper echelons of the table.

Cordoba have found some mettle away from home since Luis Carrion took over in the dugout, and they produced more of the same to beat Oviedo on their home turf after only losing once there all season. Javi Galan and Borja Dominguez got the goals for the visitors, whilst Miguel Linares netted a consolation for Oviedo shortly before the final whistle. The result leaves both teams in mid-table. 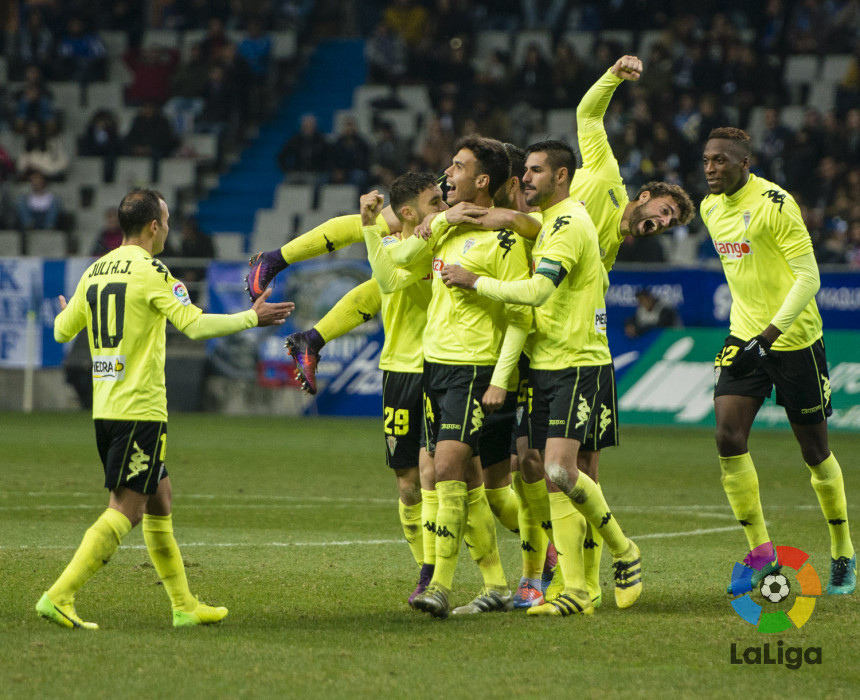 Tenerife ratified the fortress status of the Heliodoro Rodriguez Lopez, where they are yet to suffer defeat this term. Pep Marti's charges dispatched with Alcorcon thanks to goals from Jorge and Aaron either side of half-time. The Canary Islanders remain within striking distance of the promotion playoffs, whilst Alcorcon are unable to extricate themselves from the bottom rungs of the standings.

This meeting between playoff contenders ended honours even, as Lugo and Huesca served up a 1-1 stalemate at the Angel Carro stadium. The visitors were handed an 18th-minute lead when Gonzalo Melero met an inswinging corner to send a well-directed header beyond the despairing dive of Juan Jose Figueras. However, the Galicians kept plugging away and the division's top scorer, Joselu, salvaged a point when he coolly despatched an 83rd-minute penalty.

High-flying Girona were really made to work for this triumph over rock-bottom Nastic, as Pablo Machin's charges ultimately ran out 4-2 winners to take the spoils in a pulsating Catalan derby. The visitors took a 2-1 advantage into the interval, courtesy of an Ikechukwu Uche spot-kick and a thumping Sergio Tejera free-kick, but Girona hit back after the break with Juanpe restoring parity, before a Francisco Sandaza penalty and Cristian Herrera's drilled effort secured a vital three points which sees them hold on to second spot. Meanwhile, this latest reverse sees Vicente Moreno's troops remain rooted to the foot of the table.

Numancia signed off for the year with a fine win over Mallorca at Los Pajaritos, a result which hands Jagoba Arrasate's men a bit of breathing space at the bottom, whilst leaving the islanders firmly in the relegation mire down in 20th. Pablo Valcarce set the hosts on their way with a 15th-minute strike, only for Juan Rodriguez to level just three minutes later. With the game finely poised, Manu del Moral showcased all of his goalscoring nous to tip the contest in the hosts' favour, bagging himself a brace to seal an invaluable victory. 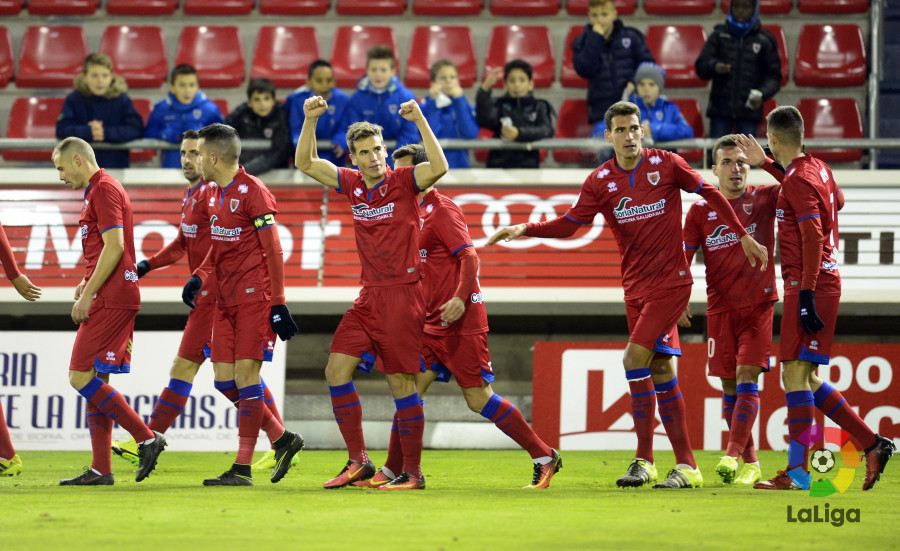 Mirandes ensured that they spend the Christmas break outside the drop zone after claiming a narrow success over Almeria. Nevertheless, the hosts will look back on this one as being anything but a routine victory, as they were made to come from behind before staging a stirring comeback to take the spoils. The Andalusians got themselves on the front foot early on and they made their dominance tell when Quique Gonzalez fired them ahead on 46'. However, things would pan out very differently after the break, as Alex Ortiz and Maikel Mesa struck to complete the turnaround and secure three precious points.

The Madrid-based outfit were unable to take the three points at home in their final match of 2016. Rather, it is Zaragoza who will be feeling the Christmas cheer after their first win on the road this season. All three goals came late in the game, with the visitors taking the lead thanks to an Alex Moreno own goal. Zaragoza's second came through Angel in the 84th minute, but there was more to come. Rayo pulled one back through Javi Guerra, but it was too little too late. 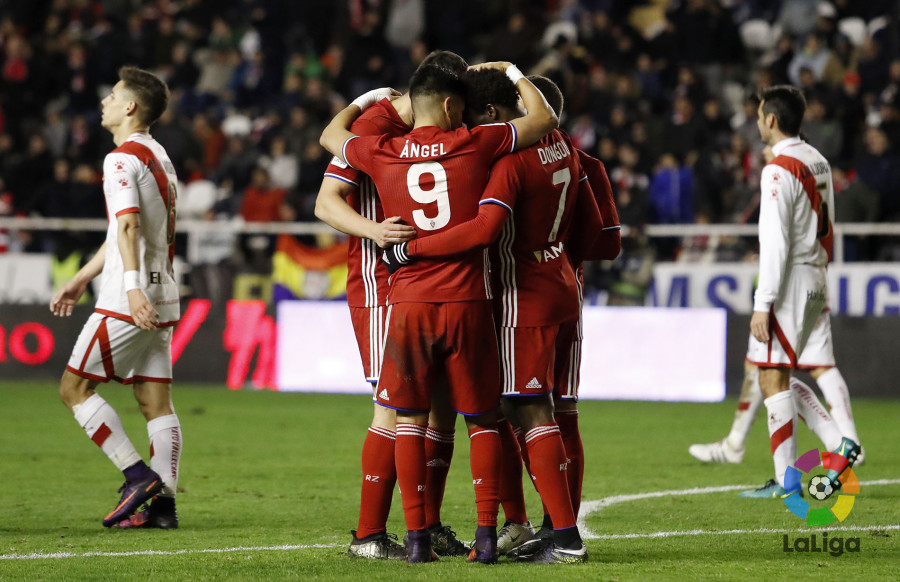 Cadiz produced a resounding victory to take them into fourth place during the festive break. Alfredo Ortuño put the Andalusians in the ascendency with just 16 minutes on the clock, but we had to wait until after the interval for the rest of the game's goals. Khalifa Sankare and Nico Hidalgo added to the home side's lead to make it 3-0, lifting the crowd out of their seats. Although Aridane Hernandez gave Sevilla Atletico a glimmer of hope with an own goal, Salvi made it 4-1 in injury time to complete the drubbing.

*UCAM Murcia CF v Levante UD was postponed due to the poor state of the pitch caused by adverse weather conditions.