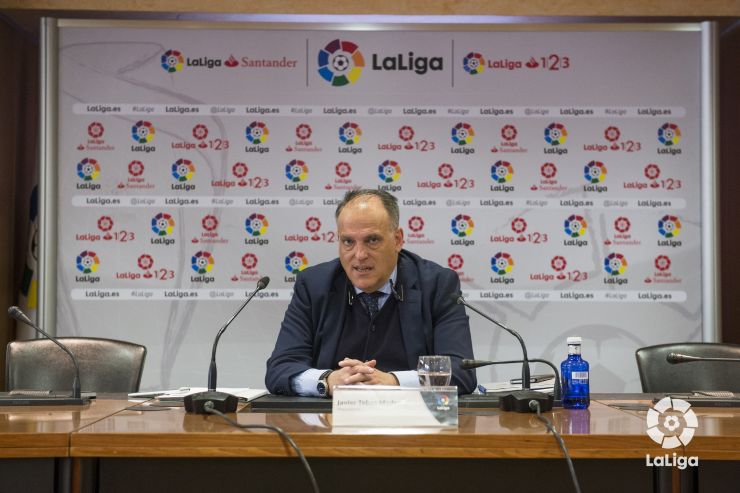 Javier Tebas: "LaLiga is going to bolster its digital strategy because it increases the value of its audiovisual rights"

Javier Tebas presided over the Extraordinary General Assembly with the clubs and SADs, where issues including the renewal of audiovisual contracts and the importance of a good digital strategy were covered.

LaLiga's headquarters hosted the Extraordinary General Assembly this Wednesday 29 March, attended by representatives of all of the clubs and public limited sports companies (SADs), with the exception of Real Madrid and RC Celta. The assembly was presided over by Javier Tebas and dealt with a number of issues, including the renewal of audiovisual contracts and the importance of LaLiga having an effective digital strategy.

"One of the main topics dealt with at the assembly was the upcoming renewal of certain audiovisual contracts, especially European ones, at the end of the 2017/18 season," assured LaLiga president Tebas in a press conference afterwards. There was also an audiovisual presentation with figures on national and international audiences during the first half of this season. These showed that the domestic residential audience has grown by 14% compared to the 2015/16 campaign, the national non-residential audience (Horeca) represents 40% of the total, and international viewers have increased in number by 39% compared to the same period last term. 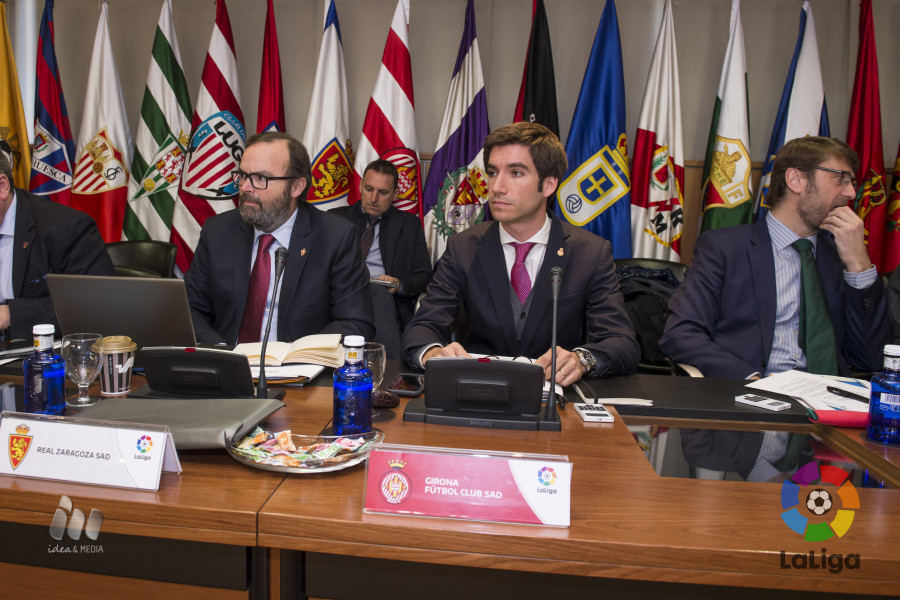 "Together with the clubs and SADs, LaLiga is going to bolster its digital strategy. We want to improve it because a good strategy increases the value of the competition, the clubs, and our audiovisual rights," explained the president. The strategy is based on two pillars: the agreement with Microsoft and the LaLiga Global Network. "We're meeting this evening with the people chosen for the LaLiga Global Network project now that they have completed their training, and the majority of them will soon travel to their destination countries to represent LaLiga," he assured in reference to the subsequent press conference to bid farewell and present diplomas to the youngsters selected for this ambitious LaLiga project, which forms part of its international expansion strategy.

During the Extraordinary General Assembly, amendments to several points in LaLiga's General Regulations and Articles of Association were also approved. Additionally, LaLiga's Good Corporate Governance report, approved in October 2016, was presented, providing attendees with a summary of its content.

During the questions and answers session of the press conference following the assembly, the LaLiga president responded to several questions regarding VARs (video assistant referees): "It's something that's going to end up being implemented. The big European leagues and competitions are already using it. We're lacking coordination here, but there's no going back. If it's not implemented soon it will be damaging to LaLiga. I hope this changes on 22 May with the new federation candidate." He also explained that "a number of work meetings have been held with FIFA, none of which the RFEF has attended." If this system is not brought in, there is a danger that Spanish referees will be left out of European and world competitions, concluded the president on the matter.

When asked about yesterday's remarks by FC Barcelona player Gerard Pique, president Tebas said: "I think he made a mistake, but what he said doesn't incite any kind of violence; it creates some tension, perhaps."