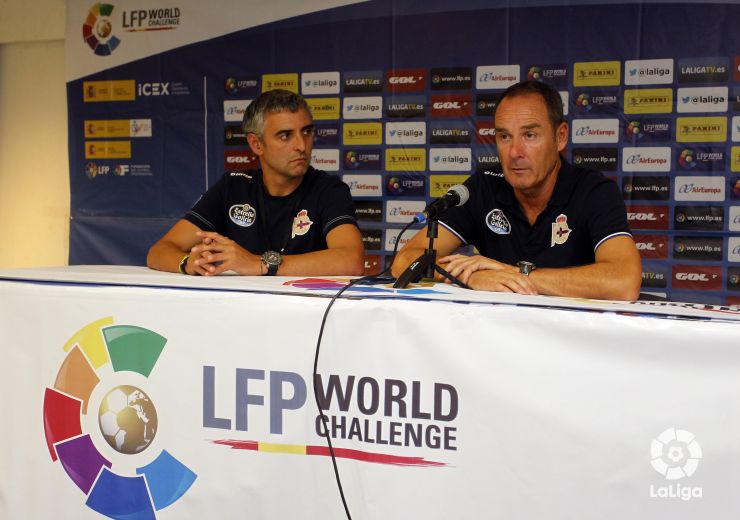 Víctor Fernández: "It was an enriching experience"

Víctor Fernández: "It was an enriching experience"

The manager of the Galician side spoke about the LFP World Challenge after playing their final match on the Colombian tour.

RC Deportivo de La Coruña have completed their participation in the Second LFP World Challenge Tour with a 3-1 defeat to Asociación Deportivo Cali in the Pascual Guerrero Stadium in the South American city. After the match, the Galician side’s manager, Víctor Fernández, gave a press conference to speak about his team’s participation in the LFP initiative.

"The Liga de Fútbol Profesional’s goal is to try and advertise our football, to try and build closer ties, both in terms of friendship and exchanges, with a country with a lot of footballing tradition such as Colombia, therefore, from our personal point of view, and that of the club, it has been an enriching experience for us", stated the Spaniard without hesitation.

Víctor Fernández, besides the two defeats, also said that the tour was very demanding, but he praised the welcome they received during their stay in Colombia. "The people in Colombia have treated us very well, we’ve tried to entertain with respectable football, at least. We have managed to share, to become more charitable and stronger in the face of suffering and difficulty", he highlighted.

Finally, the manager of the team from Coruña also praised his opponents, revealing: "Deportivo Cali is a very quick team. They tried to play very direct football and made the most of our physical inferiority and they were able to dictate the tempo of the match", he ended.