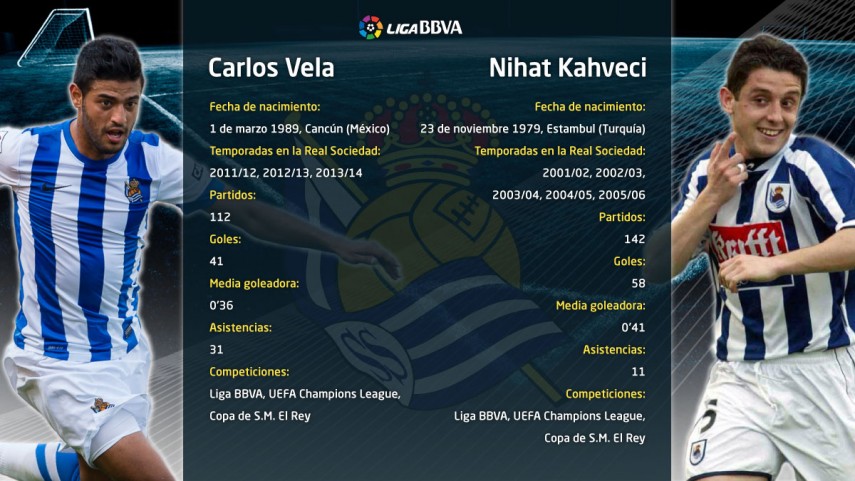 "Vela's strengths are calm, self-confidence and his sense of responsibility"

Nihat, the last player to reach ten goals in the Liga BBVA with Real Sociedad, discusses the Mexican striker.

Carlos Vela has earned himself a place in an elite club at Real Sociedad de Fútbol. Its members will go down in the team's history for scoring ten or more Liga BBVA goals in a season for the side from Donostia. "He is making history", said Nihat Kahveci, the last player to reach the milestone with the txuri urdin.

Few players ever manage to pull off the feat, but he has already done it. The ten goals and eight assists he has provided this season have put the team four points away from the UEFA Champions League spots, and his goals are synonymous with points for Jagoba Arrasate's side, who are starting to dream of bigger things.

"They can go as far as they want. They have the team , the striker and the fans for it", commented a melancholy Nihat from Turkey. And Real's current success is largely due to Vela, who has now scored 15 goals in all competitions, more than in any other season in his career. "I don't know him personally, but I know he is a humble man who works for the team. That calm results in success on the pitch", he says.

"His main strengths are calm, self-confidence and his sense of responsibility. He is a player who knows what his team expect from him and what he is capable of", said the Turkish player, while also confessing that he would enjoy playing with this new band of players the club has put its faith in: "It doesn't matter what era it is or who my teammates are, I always want to play with Real. I remember my time there with great affection. I was there for four and half years and I enjoyed it so much, both on and off the pitch".

The Anoeta faithful also enjoyed the 58 goals he gave them between 2001 and 2005. "The team has changed in recent years, but everyone remembers the line-up we had when did something really great. Even in Turkey, people list the names when they see me: Xabi Alonso, Aranburu, Karpin, Kovačević, Nihat… Now they are the ones that could go down in history".

And so far, they are on the right track. The Vela-Antoine Griezmann partnership have found the net 34 times (15 from the Mexican and 19 through the Frenchman), and their next goal is to reach 43 in all competitions, a mark set by Kovačević and Nihat in the 2002/03 season. "Both players contribute goals and that is really important. In a competition such as the Liga BBVA, if a player scores 15 goals, you are guaranteed a good position to play in Europe. And that is what has happened with them", stated the striker.

If the Turk had to give Vela one piece of advice on how to maintain his form, he has no doubts about what it would be: "A player like him cannot live in the past or be satisfied with what he has done. He has to maintain his form and always look forward".