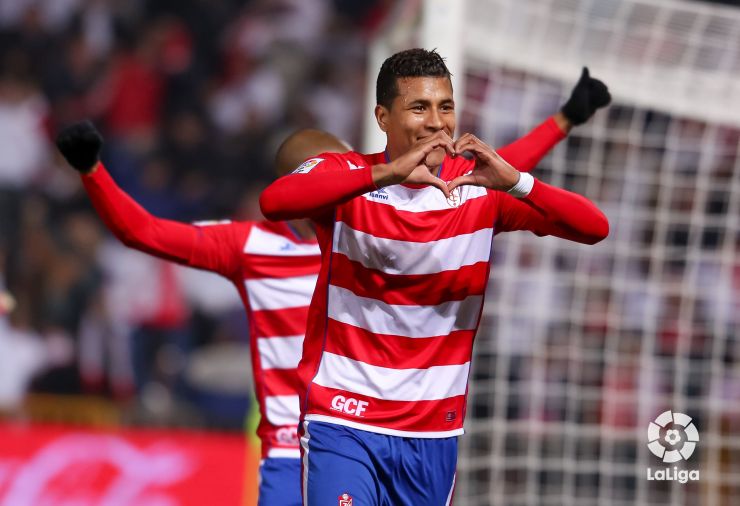 "The side has the confidence to want more"

Central defender Jeison Murillo is a regular in Liga BBVA. Young and ambitious, the Granada player spoke to LFP.es about his first year in the elite.

Spotted by the network of Granada C.F. scouts, Jeison Murillo (Barranquilla, Colombia, 27th of May 1992) is a regular in Liga BBVA. In a defensive line that has the experience of captain Diego Mainz and Senegal’s Pape Diakhaté, the Colombian centre back has forced his way into Lucas Alcaraz’s plans. Aged just 21, Murillo tastes “the world’s best league” game after game, and wants to secure his side’s safety as soon as possible, whilst also harbouring hopes of going the Brazil with Colombia this summer. Jeison spoke to LFP.es with the same security that he shows on the field of play.

LFP.es: In your first year in the first team, you are the second most used player by Lucas Alcaraz. What were you expecting of this first season, and how would you evaluate you presence in the team?
Jeison Murillo: It is satisfying for one to see that they’re important for the side and I’m happy for the minutes I’ve played. I think that it’s a result of the work I put in day in, day out, and after winning the opportunity I took it with confidence.

LFP.es: How have your first months in Liga BBVA been?
Murillo: It’s a nice experience. Any foreign player who had this opportunity would take advantage to the maximum, and more in a side that want to carry on growing. For me it is a big help that this side has a lot of ambition.

LFP.es: You have gone from team to team before your debut in Liga BBVA. Aged 19 you played for Cádiz in the Segunda B, last season in UD Las Palmas in Liga Adelante and now aged 21 you’re a starter with Granada.
Murillo: They are times that have allowed me to live, in which I’ve lived with appetite and maximum professionalism and in each of those I’ve learned to arrive at the next. Now I have the opportunity to play in the best league in the world, I’ve taken it confidently and professionally in order to go in to each game and give my maximum.

LFP.es: The defensive line suffered changed in the winter transfer window. Pape Diakhaté has gone and Tiago Ilori has arrived, another promising young player like you. What work does the captain Mainz do at the back?
Murillo: Both [Diakhaté and Mainz] are experienced player who have given me confidence and helped me on and off the pitch. I have learned a bit from both of them to do well. Now Ilori has arrived, he’s a young player who wants to learn and grow, just like me. If we have the opportunity to play together hopefully we can show the qualities that we both have and help each other out.

LFP.es: Six points from relegation, Granada sit comfortably in 12th. How is the group?
Murillo: The side are confident and want more, and we won’t stop and let the sides below us catch up. We work day upon day to carry on the right path and not make things complicated.

LFP.es: The side is a mix of veterans like Mainz, Riki and Piti with youngsters like Brayan Angulo, Ilori, Brahimi, yourself. It’s a good mix.
Murillo: We’re a mixed team, young players and veterans. We get on well because the young players are hungry and they are helped by the experience of the veterans who let us grow and advance as footballers.

LFP.es: How do you see the rest of the season?
Murillo: The most important thing is to look for safety, maintain our distance above the relegation zone and have our feet on the ground with wins. We don’t think anything and we continue to work in order to stay up. First we have to have this, to make the fans happy.

LFP.es: What does it mean for your friends and family from Colombia to see you excelling in Liga BBVA?
Murillo: My parents are so proud and it is the nicest feeling that you can have. I feel the satisfaction of seeing family and friends happy because they’ve always believed in me and they’ve always been there to help. I’m a long way from my country, but I’m doing the right things and on the way up it’s always nice to see that smile.

LFP.es: Around the corner is the FIFA World Cup in Brazil. You’re a regular in the Colombia youth sides and you’re now progressing in the best league in the world. Do you think you’ve got a chance to be called up for the World Cup?
Murillo: It’s brilliant that my country is at the World Cup. You play or you don’t play, it’s always satisfying because the whole country is with them. If I were to be called up I’d be very happy with the opportunity. It’s complicated and difficult, but you never lose hope.