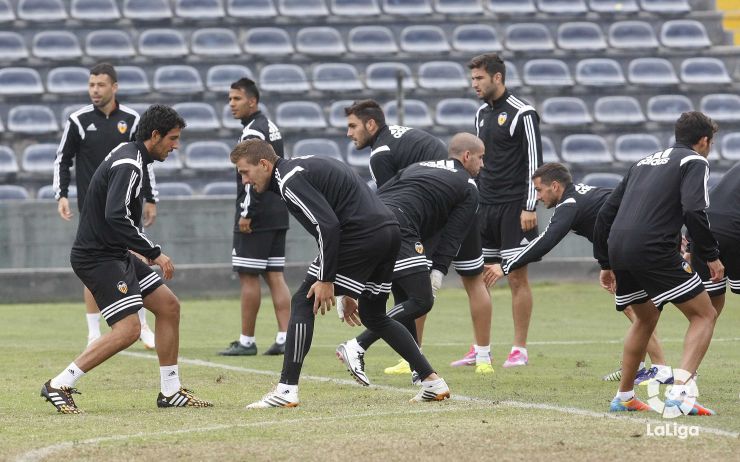 Nuno: "It's a pleasure to get to know our Peruvian fans"

Nuno Espirito Santo’s side took to the pitch for the first time since they arrived in Peru, and did so at the Estadio Alejandro Villanueva in the El Matute neighbourhood of Lima. A light session that was noted for the jovial mood amongst the squad that is about to affront a new and exciting 2014/15 season.

After the training session there was a presentation of Saturday's game against Club Alianza Lima, which is part of the LFP World Challenge tour. Valencia CF manager Nuno and attacker Sofiane Feghouli took part in the presentation, whilst Walter Ibáñez and Gabriel Costa were there from the Peruvian club.

The Portuguese coach explained that his side are up for the game. "To take on a historic side such as Alianza Lima gives us more motivation", he said. "We are playing to win", he added "we will always look to win". Nuno ended by thanking the warmth received since their arrival. "These games allow us to get to know other cultures, and shows that Valencia is a big team. It's a pleasure to see our Peruvian fans".

Sofiane Feghouli also positively spoke about the game, saying he was "very happy" to take on a rival "who we have never played before". The Algerian player thanked the fans for their welcome; "they're treating us very well, and it's a great experience. It's a new culture, football that we don't know, and we can discover how the fans and stadiums of this country are".

Walter Ibañez was happy and thankful at the chance to take on Valencia. "They are a very big team in Spain", said Walter Ibáñez, "we're very proud because it's something that’s very nice". The Peruvian player asked for fans to fill the Estadio Nacional de Lima: "It's a unique opportunity to see the team they love against a powerhouse of Spanish football".

For central midfielder Gabriel Costa, Saturday’s match will be "a one-off chance to take on a side like Valencia. It's an honour to play against a side from the Spanish league".

Valencia CF and Club Alianza Lima will face off at the Estadio Nacional de Lima (17:30 local time, 0:30h in Spain). The match can be watched free, without geographical restrictions, through the Liga de Fútbol Profesional’s official website. (www.lfp.es/laligatv).