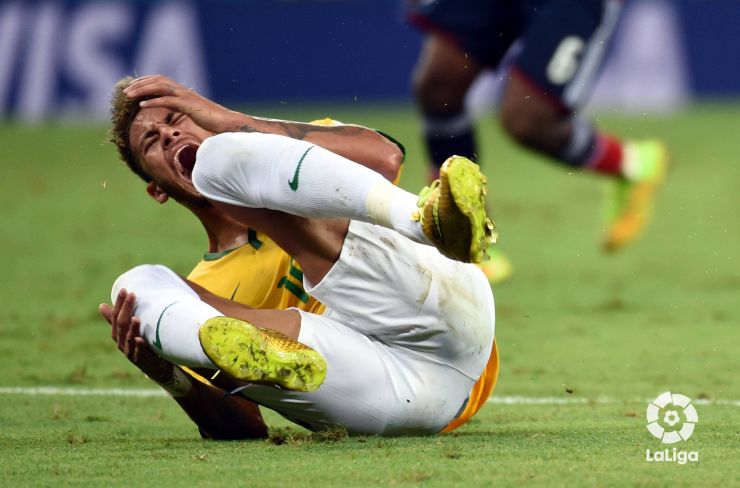 Neymar to miss the rest of the World Cup

The Barcelona player has fractured his third vertebrae and will not play again in the tournament.

Brazil's 2-1 victory over Colombia in their quarter-final clash at the FIFA World Cup was tainted by some bad news for the team. The competition came to a painful end for one of their stars who will now miss the rest of the World Cup due to an injury.

Liga BBVA player Neymar da Silva fractured his third vertebrae in a challenge from Camilo Zúñiga in the dying minutes of the match. The Colombian's knee crashed into the lower back of the FC Barcelona player, who had to be taken from the pitch on a stretcher and transferred to a hospital in Fortaleza, where, during the night, the worst was confirmed: between three and four weeks' recovery, meaning the player will play no further part in the World Cup.

Despite the joy of reaching the semi-finals, the Brazilian side are still feeling decidedly cautious, even more so having discovered that their star player is out of the competition. Neymar scored four goals in his five games and dazzled the world of football with his performances throughout the competition so far, topping the LFP World Cup ranking.

As well as missing the Barcelona player, Brazil will meet Germany for a place in the final without their captain Thiago Silva, who will miss the game for receiving a second yellow card.