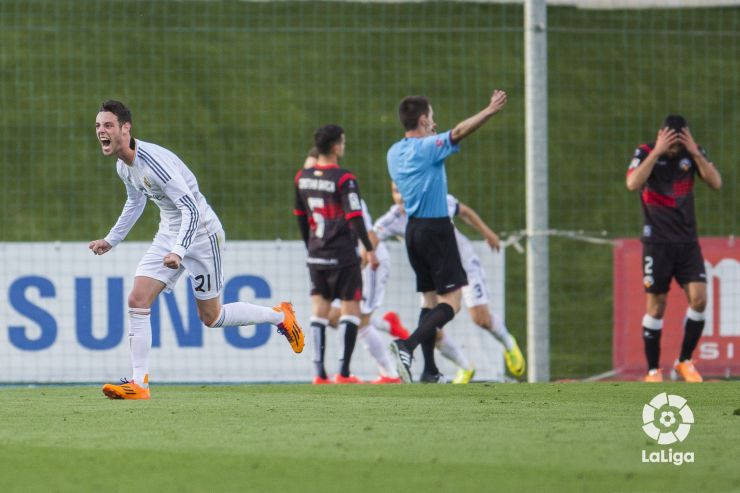 The Castilla midfielder came off the bench in the 58th minute and had enough time to score two goals that gave his side a victory, took them out of the relegation zone and ensure that their future is now in their own hands.

Four minutes was all that Álvaro Medrán needed to ensure glory on Saturday – his own and that of his team’s. Real Madrid Castilla's 2-1 win over CE Sabadell, which came thanks to a brace from the centre midfielder, means the Whites are now very close to safety having climbed out of the relegation zone into eighteenth in the league table, a position that means their fate is now in their own hands heading into the last matchday of the Liga Adelante season.

There is no greater joy an academy player who just turned 20-years-old could feel. After a complicated season in which inconsistency and a lack of finishing ability in front of goal has cursed the Whites, Medrán scored his first two goals for the team and, even more importantly, earned his side three invaluable points.

He came on for José Rodríguez in the 58th minute and, with some crafty play, opened the scoring just 120 seconds later in front of the Alfredo di Stéfano Stadium crowd, who started chanting his name as one of the team's most important players.

Medrán has only played eight games for the Madrid side, but his tally of ten goals for Real Madrid C this season has earned him a spot in the list of promising young talent to look out for in the White club. On Saturday he once again displayed his dribbling ability, his pace and the hunger to succeed that will take him far.

In the 63', the centre midfielder found the back of the net again to claim his second of the evening. Fernando Llorente’s goal for Sabadell afterwards was not enough to rain on the Castilla parade, and Manolo Díaz's men will now be able to breathe a sigh of relief having climbed out of the relegation and into the safety zone. Now they only need to beat Real Murcia CF on the last day of the season to put the cherry on top of what has been a demanding but commendable season.